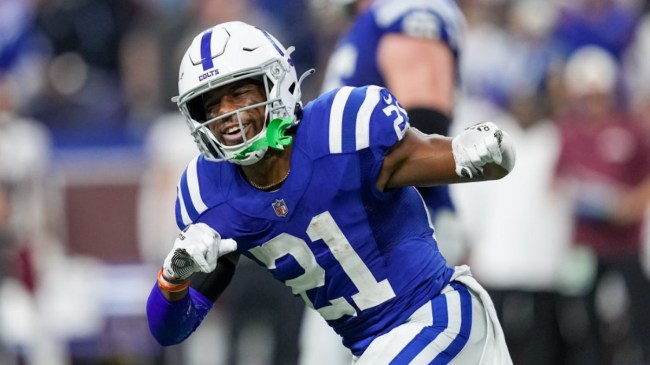 The Buffalo Bills have spent years trying to fix their run game.

Back in 2019, they drafted Devin Singletary to take over for LeSean McCoy as the team’s starting running back. A year later they once again found themselves pursuing a running back in the draft when they took Zack Moss in the 3rd round of the 2020 draft.

The combo of Moss and Singletary still wasn’t enough to give the Bills a reliable running game, so this year they drafted another running back. This time around it was James Cook in the 2nd round.

Still, the running game was the clear weak point of the offense.

This time, the Bills decided to make a move at the trade deadline to try and address their rushing attack. That move came in the form of a deal for Nyheim Hines. The Bills traded Moss and a conditional 6th round pick to the Colts for Hines earlier this week.

Today, Bills GM Brandon Beane appeared on “The Pat McAfee Show” and it seems McAfee, who formerly played for the Colts, wasn’t too happy with Beane for making the move. He told Beane “F– you” before he let him speak on the show. Beane had a hilarious response to the comment from McAfee.

Fuck you for taking Nyheim Hines 😂😂

"I respectfully appreciate the fuck you.. he's a guy that I've had my eye on for a while" ~Brandon Beane#PMSLive #BillsMafia pic.twitter.com/0XAtNR75wA

Well, I respectfully appreciate the f— you.

In all seriousness, he’s a guy I’ve had my eye on before. We checked into him, just like you check in on guys at different times. A couple of summers ago — I believe it was during the COVID summer — I really didn’t feel like we had that piece in the backfield for Josh [Allen] to have an outlet player.

Hines isn’t exactly the answer to the Bills’ rushing issues, having never run for more than 380 yards in a season. Still, he could help them in other ways. Short passes to Hines could make up for some of what the Bills offense doesn’t get from their running game.

In a passing attack like the one the Bills have, he’s sure to make an impact.