BYU Will Replace Liberty And Face Coastal Carolina On Saturday, Setting Up The Most Fun Undefeated Matchup Of The Season 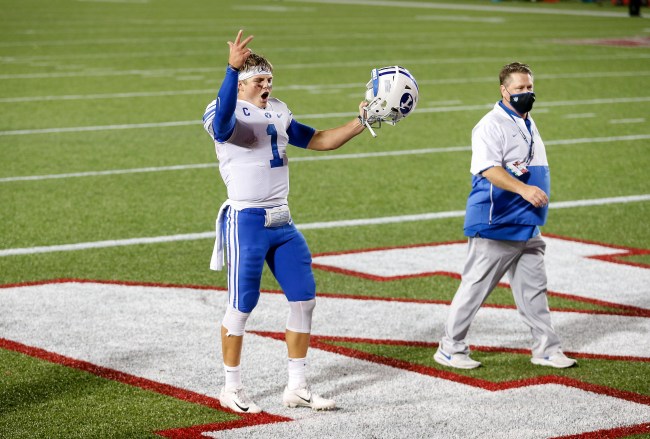 The rumors are confirmed and the most fun college football game of the year is on. Undefeated Coastal Carolina was scheduled to face Liberty University on Saturday in a Top 25 matchup, but the Flames are dealing with a COVID-19 outbreak and are unable to play. In their place, No. 13 Brigham Young football will travel to Conway, S.C. to face No. 18 CCU. With College Gameday in town, this sets up an even better game between two undefeated teams.

BYU and Coastal Carolina have announced a game on Dec. 5, 2020, at Brooks Stadium in Conway, South Carolina.

ESPN’s College Gameday will be on site for the matchup, and the game will be broadcast at 5:30pm EST on ESPNU.

Several Liberty players and staff members, including star quarterback Malik Willis, either tested positive for Coronavirus or were out most of the week due to quarantine protocol. The school, coached by plaster saint head coach Hugh Freeze, had hoped to play, but medical officials paused all team-related activities after Wednesday’s results were returned on Thursday morning.

As the situation was unfolding, BYU, which last played on Nov. 21 and was looking for another opponent before its game against San Diego State on Dec. 12, was in contact with the host school in case Saturday’s meeting fell through. It did, and the deal was quickly finalized thereafter.

The Chanticleers, led by second-year coach Jeremy Chadwell, has already clinched a berth in the Sun Belt Conference championship on Dec. 9 and will face Louisiana. They beat the Ragin’ Cajuns 30-27 earlier this season and are on a roll in only their fourth full season as a member of the FBS with a Power Five win over Kansas. What is happening in Conway is exhilarating and the there is no other team in the country that plays with more swagger.

Linebacker Teddy Gallagher is the leader of the electric factory and sports a bleached-blonde mullet that he calls the Chanticleer Chandelier. To make matters more fun, they boast a turnover prop for the ages. Whenever the defense forces a turnover, the individual who made it happen dons the turnover cloak and lifts a mighty sword.

And the team is full of a bunch of Savages, all the way down to quarterback Grayson McCall.

We work the hip toss every Tuesday in QB indy. pic.twitter.com/b8qRr5JsT8

Their opponents are no joke either. BYU had to build a schedule from scratch after its original matchups that included three Pac-12 teams, two Big Ten teams and one SEC team fell apart due to COVID-19 as most conferences didn’t allow out-of-conference games to be scheduled. It was touted as the strongest in program history, and the Cougars are good enough to compete with the best. However, that didn’t happen and they have won all nine of their games by huge margins and scored more than 40 points in eight of their nine games. In the last five, they have won by an average of 34.4 points.

Quarterback Zach Wilson is having an unbelievable year and continues to make NFL-caliber throws week in and week out. He has completed 74.3 percent of his passes for 2,724 yards and 26 touchdowns with only two interceptions. He is rising up draft boards and deserves every bit of recognition.

Kickoff is at 5:30 p.m. EST on Saturday and the game will air on ESPNU. Buckle up, it’s going to be a wild ride.