BYU Football Reportedly Turned Down Game With Washington After Wanting To Play ‘Anyone, Anytime, Anywhere’ 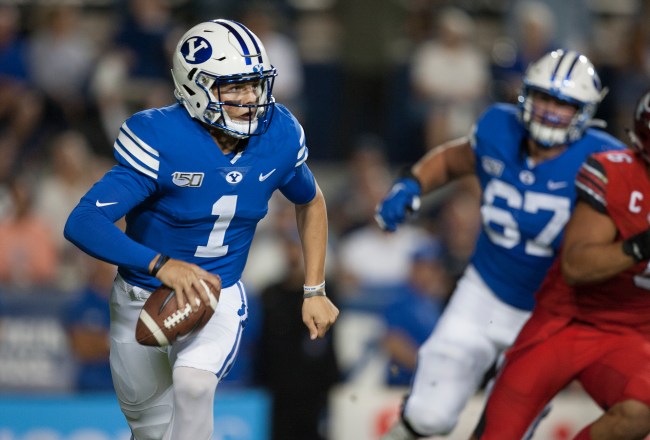 No. 8 BYU football is undefeated after its ninth win of the season yesterday and is making a case to be in the College Football Playoff. However, it reportedly turned down a game against Washington this weekend.

SOURCES: #BYU turned down the opportunity to play #Washington this coming weekend. UDub had reached out yesterday but was told BYU wanted to wait until after the CFP rankings Tuesday to gauge their place. "It's off the table."

Feldman’s findings quickly received more context, but the result still stands. The Cougars will not play the Huskies this weekend, as of right now.

Source: Some context on the potential BYU-Washington game. BYU is interested in playing, but only if they can lock in a contract immediately. They are concerned that Pac-12 will make UW play Utah on Sunday if ASU can't play. "If we can get a game locked in, we want to play."

This is a big deal, because the independent team from Provo, Utah will not play a schedule that is up to the standard of a CFP-bound program this fall. When COVID-19 moved the majority of college football to conference-only schedules, BYU was left without games to play. It quickly assembled a 10-game, non-Power 5 slate that punched as high as Houston and Boise State, and swung as low as FCS program North Alabama, but couldn’t get any of its typical Pac 12 teams on the list.

Now, nine weeks in, the Cougars are beating opponents by a point differential of +303. That’s wild.

Quarterback Zach Wilson has thrown for 2,724 yards and 26 touchdowns on a 74.3 percent completion rate with only two interceptions. He has also added eight touchdowns on the ground. The 6-foot-3, 210-pound (soaking wet) junior makes highlight reel throws week-in and week-out and often times, when the lead is secure enough, he doesn’t play all three quarters.

Zach Wilson just threw a ball over the moon

In addition, running back Tyler Allgeier is averaging 7.3 yards per carry. But Wilson’s reel is more fun so here’s another one of his dimes.

Wilson and co. are on a roll and it’s hard to imagine that San Diego State will stop them. The Cougs have been very vocal about their belief that they could beat any team in the nation and deserve a shot to compete for a national title. That message was led by the poster child on Saturday.

Any team, any time, any place. pic.twitter.com/Rs9ihEGfA8

Yet, they turned down a game with the Huskies after the Pac 12 announced it would allow one out-of-conference opponent addition to the conference members’ schedules. Hm.

Washington found out that Saturday would be open after its game against its in-state rival Washington State was cancelled. Wazzu was scheduled to play Stanford last weekend but had a large number of positive tests pop in the days leading up. Between the players who were diagnosed and those in quarantine due to contact tracing, last weekend’s game and the Apple Cup will not be played.

Thus, the Huskies went searching for a replacement opponent and saw Wilson and the Cougars as strong candidates, considering that Pac 12 teams hoping to make the playoff will need to go undefeated against the most difficult schedule possible to have any shot.

BYU’s hesitation, reportedly, is because it is concerned that the Pac 12 will force Washington to play Utah. Utah had its first two games of the season cancelled and may not be able to play Arizona State on Saturday due to an outbreak in the Sun Devils locker room that forced their last game to be cancelled.

It’s chaos, and the BYU’s belief that Utah and Washington will be assigned a game on Sunday if Arizona State can’t go is a legitimate concern. Either way, it seems like a top-ten team that is willing to play any time, anywhere, should be chomping at the bit at even a glimmer of hope to prove itself.