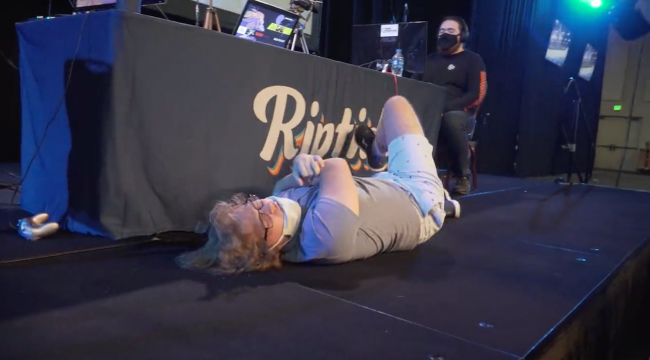 Esports star CakeAssault celebrated a tournament win so hard this weekend that he literally popped his shoulder out. Video of the injury is equally as hilarious as it is wild.

CakeAssault, who was competing at the Riptide fighting game tournament in Sandusky, Ohio is a ‘Rivals of Aether’ specialist. The indie, cartoon-style game is set in a world where civilizations wage war by summoning the power of Fire, Water, Air, and Earth.

Click HERE to get an idea of the gameplay.

With more than 245 competitors, CakeAssault’s victory at the event was apparently a huge deal. He certainly celebrated his win in the final as such.

CakeAssault sprung from his chair and went ballistic.

The expression “popping off” is used to describe the physical expression of extreme emotion during esports competition. For CakeAssault, the term now holds a different meaning.

He flared his arms so hectically that his shoulder popped from its socket.

With the crowd going WILD over @CakeAssault_ winning Rivals of Aether at Riptide, he later confirmed that he dislocated his shoulder during the celebration, thus the actual reason he fell to the ground.

The tournament champion immediately crumpled to the ground in pain, but adrenaline kicked in and he was able to get up to celebrate some more.

A popoff to put Hungrybox to shame. Congratulations to @CakeAssault_ for winning Rivals of Aether at Riptide! pic.twitter.com/AyePRiW0Me

As the fans in attendance chanted his name, CakeAssault was clearly in pain from the incident. He later took to Twitter and discussed what happened.

The champion Rivals of Aether player celebrated so hard that he dislocated his shoulder.

Of course, his injury pales in comparison to the thrill of being able to claim that he is the best Rivals of Aether player on the planet. He doesn’t want people to forget it.