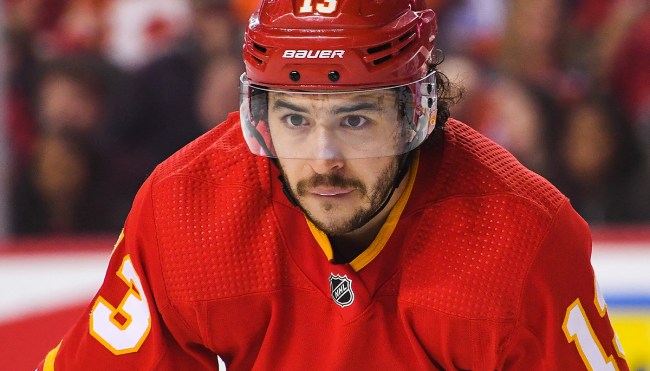 Johnny Gaudreau was an absolute stud for the Calgary Flames during the most recent NHL campaign, as the Boston College product led the team in points by posting 40 goals and 75 assists en route to helping his squad finish the regular season at the top of the Pacific Division.

The winger was in the final year of his contract with the Flames, and there was little doubt bringing him back was a top priority for the team in the offseason. The franchise reportedly tried to stop him from exploring free agency with a contract that would’ve been worth $80 million over the course of eight years, but that wasn’t enough to prevent him from testing the waters.

Johnny Hockey did exactly that when the league’s free agency period kicked off. There were rumors he was interested in signing with the Flyers to be closer to where he grew up, but Philadelphia (along with New Jersey) was unable to put together a deal that was more attractive than the one he signed with the Columbus Blue Jackets on Wednesday; a theoretical pay cut to the tune of more than $68 million over six years.

The fact that Gaudreau turned down a bigger payday to leave the Flames behind didn’t exactly sit well with a number of fans, and CBC Calgary anchor Andrew Brown didn’t miss out on the chance to throw a great chirp his way while closing out a broadcast on Thursday.

Take me with you Johnny! pic.twitter.com/B53ewPilrz

This isn’t the first time Brown has made light of Calgary’s misfortunes, as he also had this to say after Connor McDavid and the Edmonton Oilers prevailed in the Battle of Alberta after only needing five games to send the Flames home in the second round of this year’s Stanley Cup Playoffs.

That’s the kind of guy you want on your broadcast team.