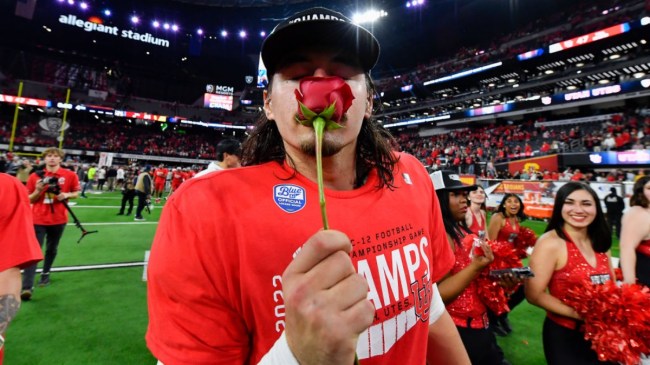 Last night Utah spoiled the PAC-12’s last chance to get a team into the College Football Playoff for the second consecutive year.

Last year, they handed Oregon their second loss of the season with just a couple of games left in the regular season and then dominated them a second time 2 weeks later in the PAC-12 Championship game for good measure.

This year, they had to wait until the title game to play spoiler, but they took advantage of the opportunity in a big way once again.

After falling behind 17-3 in the second quarter, Utah managed to turn things around and outscored USC 44-7 the rest of the way to hand them their second loss and seemingly put an end to any hopes they had to become the 1st PAC-12 team in the College Football Playoff since 2017.

Before the game, USC quarterback Caleb Williams made headlines for painting “F*** Utah” on his fingernails.

After crushing the Trojans’ hopes of a Playoff spot, Utah QB Cameron Rising was asked about Williams’ fingernails and gave an incredible response.

This is just a great answer from Cameron Rising after toppling the Trojans and it’s an answer he really earned last night. Rising shredded the USC defense to the tune of 310 yards and 3 touchdowns on the way to locking up a 2nd consecutive trip to the Rose Bowl.

It may not have been the best idea to give the Utes any extra motivation before this game.