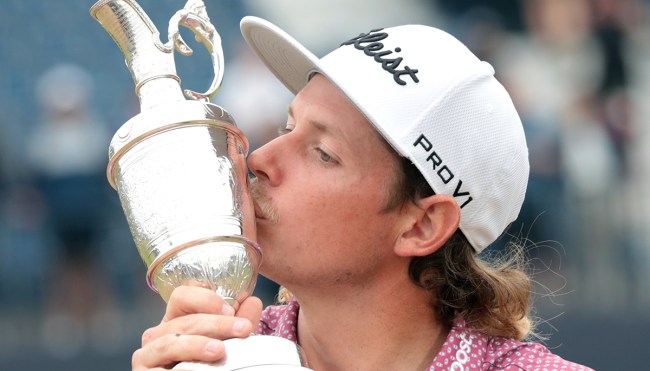 On Sunday, Cameron Smith was able to fend off the rest of the field on the final day of the British Open by posting six birdies on the back nine at St. Andrews en route to winning the first major of his career.

The Australian—who won The Players Championship back in March and tied for third at The Masters a month later—has become a fan favorite in recent years for reasons that should be obvious by simply looking at his sketchy mustache and glorious mullet.

Following the victory, he endeared himself even more when he was asked about how he planned to celebrate, saying he was planning on finding out how many beers he could fit in the Claret Jug awarded to the winner of the tournament (he estimated the trophy could probably fit a couple while announcing his plan to house 40 brews at a press conference after play wrapped up).

Now, Smith didn’t specify exactly how long it would take him to down that many beers, so while it’s unclear how many he consumed between Sunday evening and the following morning, he did get a chance to put his estimate to the test.

On Monday, Golf shared a video of the newly-crowned champion addressing the question on everyone’s mind, saying “It’s pretty much exactly two.”

Cameron Smith gives us the answer we've been waiting for…

Smith also confirmed he “had a good night with it” and had a cup of water and a mug of coffee in front of him when he recorded the video, so it’s safe to assume the beer was flowing fairly freely after the big win.

Now, we just have to hope Smith can win the PGA Championship and take home the Wanamaker Trophy, which (as Collin Morikawa learned the hard way in 2020) has a removable lid and can definitely hold more than two beers.