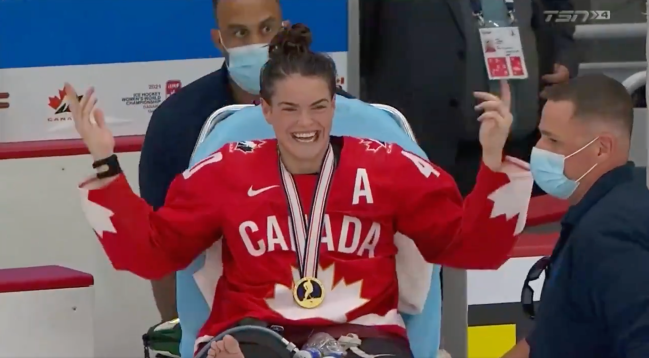 Canada women’s hockey had to wait six years to celebrate an IIHF Women’s World Championship gold medal. However, in doing so, the team’s alternate captain Blayre Turnbull “snapped her ank’e” in the dog pile.

That didn’t keep her from fighting through pain and receiving her medal.

After the American side won the last five tournaments, the Canucks broke through in overtime and took one back on Tuesday night. The game-winner came with just under 13 minutes remaining in the extra period and it was bizarre.

Marie-Philip Poulin found the back of the net, but it took nearly a full minute for the video room to confirm the goal. Once it did, Canada exploded off the bench and piled on one another.

Somewhere along the way, Turnbull got her leg twisted up. You can see her being receiving treatment from the medical staff at the 1:25 mark below:

Take a look here. Around the 10-second mark, on the far left, you can see Turnbull come out of the dog pile with a limp leg.

Off the post and straight to #WomensWorlds CHAMPIONS!!!! @HockeyCanada pic.twitter.com/nIsKYWcvt6

Although her lower extremity is noticeably mangled, Turnbull put her pain aside and her team first.

Shortly after being helped to the sideline, she returned to the ice on a stretcher for the gold medal celebration. Turnbull says to her teammates “my ankle really snapped,” but never stops smiling.

Blayre Turnbull got injured in the celebrations, but she made it back out for her gold medal… in a stretcher! 😳😅 #WomensWorlds pic.twitter.com/JUAZUvGiVp

The United States has won eight of the last 10 World Championships and Turnbull was not missing the chance to enjoy the moment with her team. If you look up “hockey player” in the dictionary, you will find a picture of Turnbull.