Canes’ D’Eriq King Has Already Made $20k In Endorsements, Has Over 50 Offers From Brands 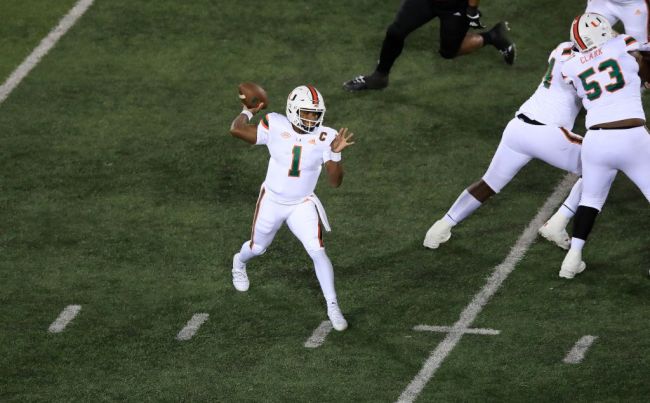 It’s been less than 24 hours since college athletes were allowed by the NCAA to make money off their name, image, and likeness and D’Eriq King is already cashing in.

According to King, he’s already made $20k off endorsements and he plans to save all the money that he’s going to make away from football.

D’Eriq King tells @SINow that his deals today alone will net him more than $20,000. He received an immediate five-figure signing bonus from the first business he signed with, College Hunks moving service.

What’s he doing with the money?

“Saving it,” he tells SI. pic.twitter.com/PSEftD3ECu

King went on to say that he currently has about 50 brands that have reached out to work with him.

King says there are more deals on the way. He's heard from more than 50 brands today alone.

However, there is one specific brand he hopes to sign with but hasn't yet heard from: Lululemon.

He's put out feelers to the athleisure clothing line that he adores.

King said the University of Miami has been getting him ready on how to capitalize on his name,image and likeness for the past eight weeks.

D'Eriq King made NCAA history today becoming the first student athlete to take advantage of NIL. I caught up with him at The Wharf this afternoon. He says UM prepared them for the last 8 weeks for this moment.

"When 12:01 hit it was fair game." @CBSMiami pic.twitter.com/pAaN3gzFzN