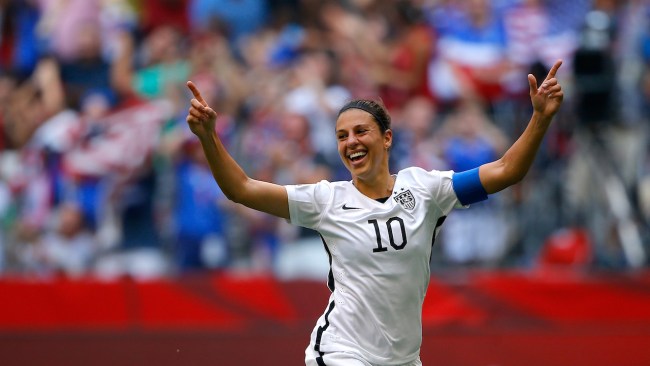 Less than a week after a video of her banging in 50-plus yard field goals went viral, United States Women’s National Team legend Carli Lloyd has reportedly received an offer from a team in the National Football League, according to Fox Sports.

According to Lloyd’s trainer James Galani, the USWNT icon was approached by “multiple” NFL teams after a video of her kicking a 55-yard field goal while visiting with the Philadelphia Eagles went viral.

“She was told (she could) play on Thursday, the NFL game, but she is playing Thursday with the national team, so that was the conflict.”

Furthermore, Galani told Fox Sports that while Lloyd, 37, is the type of athlete who would normally want more time to “get comfortable and acclimatized” prior to such an opportunity, the proposition of being true gender boundary breaker in the world of sports is quite appealing to the American soccer legend:

“Knowing Carli, I don’t think she would just hop on and do it. She would need a couple of weeks training just to get comfortable and acclimatized. But things have escalated and it is real,” Galanis said.

“We are thinking about what it would do to the sport itself, every sport at every level. She would be the first female that’s really playing with males, and what would it do to the whole equality (issue).

For all you NFL teams looking for a kicker😉(via @CarliLloyd) pic.twitter.com/AJOgDeKwBT

Lloyd — a two-time FIFA Women’s World Cup champion, two-time FIFA Player of the Year, and two-time Olympic gold medalist — would be the first woman to play in a National Football League preseason game. At this time, Lloyd has yet to make a public comment about any potential NFL offers.

As for which teams are in desperate need for a kicker, both the New York Jets and the Chicago Bears come to mind. Personally, as a lifelong idiot who somehow got suckered into rooting for Gang Green, I can promise that she can’t possibly be any worse than the current crop of kickers on the roster, so I’m all for it. The NFL is ready

Also, Rutgers U, stand up baby!!! We really out here.