Carolina Panthers Head Coach Claims He Still Hasn’t Made A Decision At Quarterback, But Chose Not To Have Sam Darnold Or Baker Mayfield Play Last Night 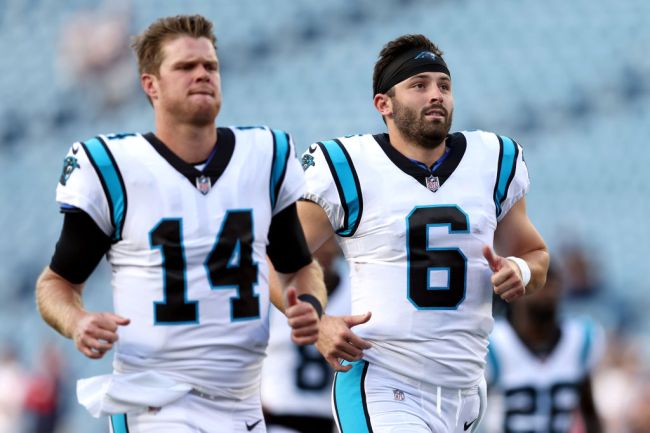 The Carolina Panthers played their second preseason game of the year last night against the New England Patriots. Panthers head coach Matt Rhule had previously given this game a little bit of extra importance when he said that he wouldn’t be ready to name a starting quarterback until after this matchup.

Then the Panthers made an interesting decision ahead of that second preseason game. They decided not to play Baker Mayfield or Sam Darnold, instead opting to let PJ Walker and Matt Corral alternate as the team’s quarterback for the night.

It led many to believe that the Panthers were ready to announce that they had arrive at the quarterback decision everybody had made weeks ago. They were expected to be ready to finally name Baker Mayfield their starter.

It turns out that isn’t the case. According to Rhule, the team still isn’t ready to name a starter.

Matt Rhule on whether he was ready to name his starting quarterback in the competition between Baker Mayfield and Sam Darnold, who did not play tonight: “Not yet. I’m not prepared for anything yet.’’

This is a pretty unconventional way to handle your quarterback competition. If the Panthers really still haven’t made a decision on their starting quarterback, why would they not take every opportunity they can get to take a look at their two starting options?

Instead, they chose to take a look at a rookie QB who they know will be on their roster in Week 1 and another QB who they most likely don’t have room for.

The sooner the Panthers just admit that Baker is their starting quarterback, the better it will be for everybody.