Carolina Panthers Still Looking At Another Option At Quarterback 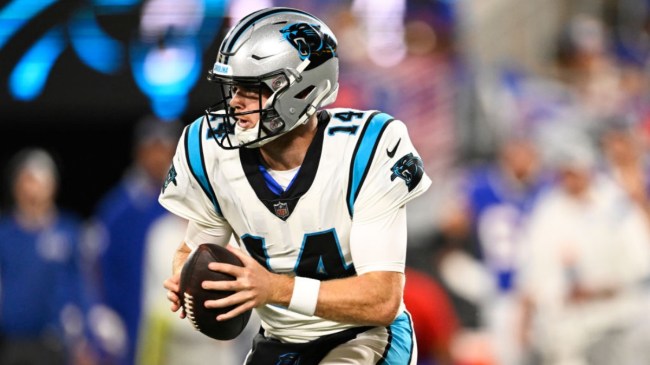 Baker Mayfield has been given one last chance to prove he should be a starting quarterback in the NFL. The last couple o chances haven’t gone so well with Baker struggling for the Browns last season and being replaced in the offseason and then struggling for the Panthers this season only to be replaced by PJ Walker.

With PJ Walker suffering a high-ankle sprain in last week’s matchup against the Falcons, Baker is once again expected to step into the starting role for the Panthers.

Yesterday, Panthers interim head coach Steve Wilks revealed that he wants to give Sam Darnold the chance to play.

Wednesday Panthers notebook: Jeremy Chinn's status is up in the air, and more on Sam Darnold's potential workload. https://t.co/qSVdrpNhmm

I think it’s just trying to pick and choose the flow of the game. Something that I mentioned to those guys the other day with Baker, if it happens, just giving him warning that I’m not pulling you. I just want to be able to get Sam some opportunities. Because the first time that he goes in there (potentially to start), I don’t want it to be the first time. I want to be able to get him acclimated a little bit to the speed of the game.

The Panthers owe it to themselves to see if they have anybody worth keeping around beyond this season, but it seems pretty likely they’ll be disappointed with what they find.

Baker Mayfield hasn’t been good as their starter. Sam Darnold was bad last season. Their most likely long-term option currently on their roster is Matt Corral and they unfortunately won’t get a look at him this season.

It looks like the rest of the Panthers’ season is going to be a tryout for one of their quarterbacks to get the chance to back up Corral or a rookie QB next season.