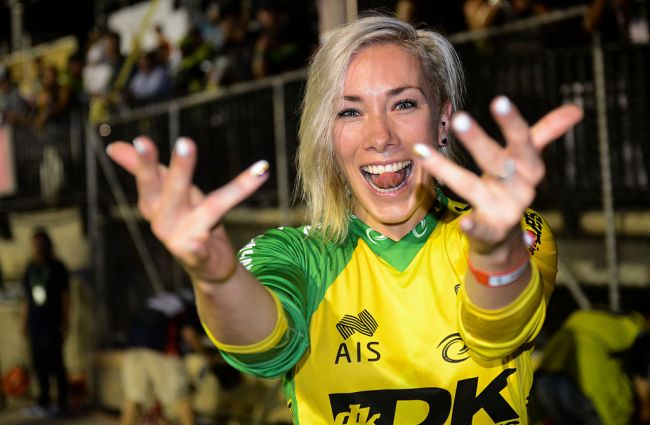 Australia’s eight-time BMX and Mountainbike World Champion Caroline Buchanan is a beast. The 30-year-old from Canberra recently became the first woman to throw a front-flip on a mountain bike and stomped it.

Buchanan landed the world’s-first trick on Friday during her first international mountain biking competition since February. She had been practicing the front-flip on an airbag at home but had only landed it six time. She had not landed it on a dirt track until this past weekend.

“I’ve had some successes in my BMX and mountain-bike career, riding in the Olympics, winning world-championship titles, but to personally do a trick for yourself and to claim a world’s first, it’s really rewarding,” she said.

The two-time Olympian landed the trick at the MTB Nines event, which welcomed female riders to the Birkenfeld Quarry in Germany’s Hunsrück-Nahe bike region for the first time. So not only was it a historic flip, but it came at a historic event.

“The conditions here to do a world’s first is the prime environment,” Buchanan said about the event. “You’ve got the guys who are really supportive, that culture, the environment, the hype, the support, the emotions, the cameras… This is just the global stage to land a trick like that!”

GoPro POV photos of the front-flip are super epic.

Here’s another look at her world’s first:

Naturally, because no one else had landed a front-flip before, Buchanan won Best Trick at The Nines. Her reel from the event shows highlights from the entire event:

“I wanted to be the first woman in the world to do a front-flip to dirt, and I have now succeeded,” she said.

Damn right you did, Caroline.