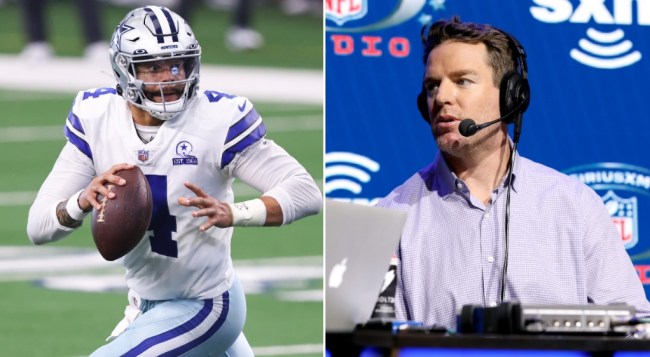 Palmer joined 105.3 The Fan on Thursday to discuss the Prescott situation in Dallas and suggested Dak should take less money because he could make up the difference in endorsements due to the fact that he’s the quarterback of the Cowboys.

I love Dak’s game. I think he’s great. I think he shouldn’t shoot for the moon (on his next contract). “Being the Dallas Cowboys quarterback, there’s a lot that comes with that financially. So, you don’t have to be the top-paid quarterback in the league. You can make as much as the top-paid quarterback in the league when you’re the Dallas Cowboys quarterback if you do take less. Because, if you win in Dallas, look at today’s television networks. You got Troy Aikman (Fox analyst), Jason Witten (former Monday Night Football analyst) and Tony Romo (CBS analyst) all on nationally televised games. Partially, because of their playing careers, but a majority of that is because they played for the Dallas Cowboys. They are a household name. You’ve seen Dak on tons of commercials and endorsements. You can make that same top-tier money if you’re Dak and you take a little bit less, and you keep all the players around you within the salary cap structure.”

Fans were not happy with Palmer’s comments about Dak’s contract situation and blasted him for it.

Palmer was a No.1 overall pick in the pre-rookie wage scale era. He got his cash when he walked thru the door whether he was good or not. Dak has always been underpaid as a 4th round pick turned starter. Pay him https://t.co/MpW0Iglcrj

Are there any former QBs with good opinions https://t.co/EnKTSjAsu4

All these washed retried QBs making statements like this is just ignorant. Him and Favre sound like 2 dummies speaking on these dudes and their money. Palmer robbed 2 franchises stealing paychecks for years. https://t.co/jrFw9CSUmN

Palmer and Favre, who both decided to hold their teams hostage, giving advice is hilarious to me. And not it’s not missed by me, either. https://t.co/4ygsH0LeAI

Man what is the matter with yal!? https://t.co/rLJDPdgfAz

What’s good with these washed up retired dudes trying to dictate another man’s money https://t.co/JgTkiSq6jL