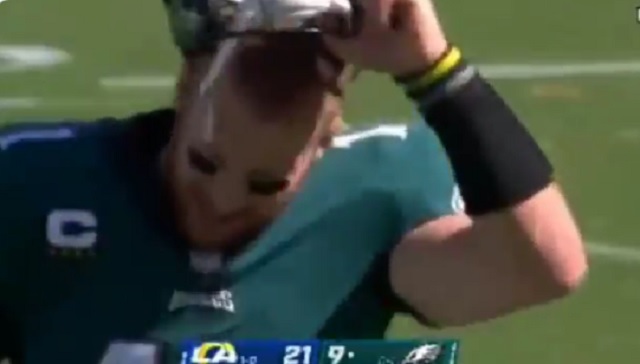 The Philadelphia Eagles are struggling in the first half against the LA Rams and it seems like whoever controls the fake fan noise inside the stadium is fed up.

At the end of the second quarter there were audible boos for Carson Wentz during the Eagles broadcast despite the fact there were no fans in attendance.

Carson Wentz gets booed off the field in Philadelphia… there are no fans in the stadium 😂 pic.twitter.com/D1lLZfJs9V

Eagles fans approved of the team pumping in boos for Wentz.

Update: Wentz was booed off the field for a second time when he threw an interception in the third quarter.

Carson Wentz just threw a pick in the end zone and the Eagles’ fake crowd noise booed him.

Wentz booed off the field again by fake digital fans in Philly after throwing INT pic.twitter.com/FXQFgaMICP