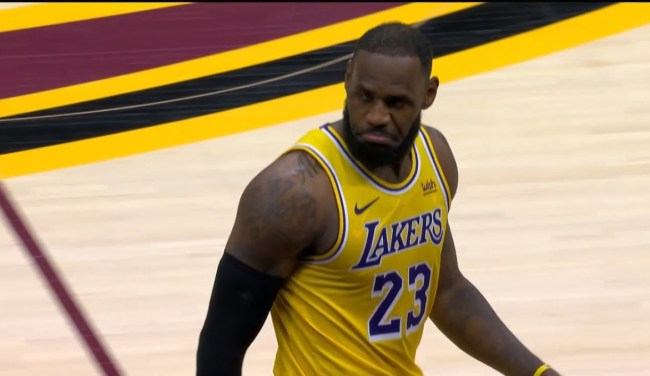 LeBron James had some extra motivation to beat down the Cavs on Monday night.

At the end of the third quarter of the Cavs-Lakers game, an unidentified Cavs fan sitting courtside caught LeBron’s attention after he missed a jump shot at the buzzer.

Just noticed LeBron James was eyeing what I assume was a trash talking Cavs fan after he missed a shot at the 3rd quarter buzzer.

LeBron then scored 21 points in the 4th quarter on 9-of-10 shooting. pic.twitter.com/T3G1bQw9Rt

After the exchange, LeBron went on to score 21 points in the fourth quarter after hitting some absolutely insane shots.

That shot shouldn’t be possible, @KingJames.

During his postgame press conference, LeBron revealed that a member of the Cavs’ front office that he knows personally talked trash to him at the end of the third quarter.

LeBron James said the person he had a back-and-forth with near the end of the third quarter — helping fuel his 21-point fourth quarter — was a member of the Cavaliers’ front office. He wouldn’t name the person, but he said they were a little too happy after he missed a shot.

It’s probably not a good idea to piss LeBron off if your team is playing against the Lakers.