Did The Refs Screw The Pacers By Not Calling A Travel On Jeff Green During Controversial Final Play? 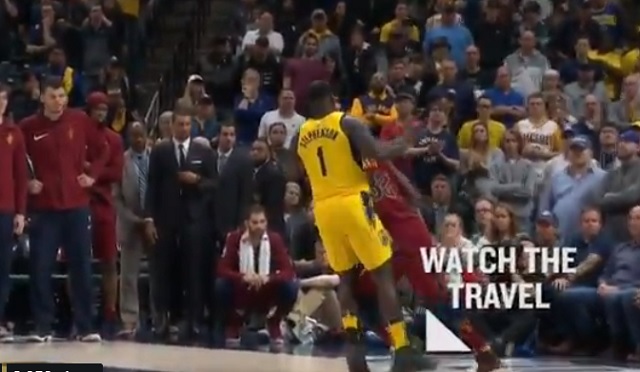 Tonight, the Pacers and Cavs played a thrilling game 4 that ended on a bit of controversy when Indiana forward Lance Stephenson wrestled Cleveland center Jeff Green to the ground with 11 seconds to go in the game.

As the play unfolded on live TV, TNT announcer Chris Webber initially believed the call should have been a jump ball but was shocked to learn that the referees had called a foul on Stephenson.

After the game was over the NBA senior VP of officals Joe Borgia explained why the call on the court of a foul was the correct call.

So Joe Borggia explains EXACTLY what happened with the Lance jump ball, in FULL detail. Kenny then asks him to explain the exact thing he just explained. MUST WATCH 😅😂🤣🏀🏀🏀 pic.twitter.com/gvxACZfi2x

On the court you can see referee Kenny Mauer come in with his fist up and he had a foul on Stephenson for the head lock. The head lock was hands on the ball jump ball.

While everyone is focusing on the jump ball it seems like Green may have traveled before he got fouled as explained by BBALLBreakdown.

Put aside the whole jump ball or foul argument for a second, and marvel at how the refs missed a blatant travel by Jeff Green… pic.twitter.com/D14XfkvGlP

Jeff Green traveled before Lance went for the ball. That pivot foot slid….