MMA Fighter’s Finger Has Been Reattached After It Was Ripped Completely Off Mid-Fight, Went Missing 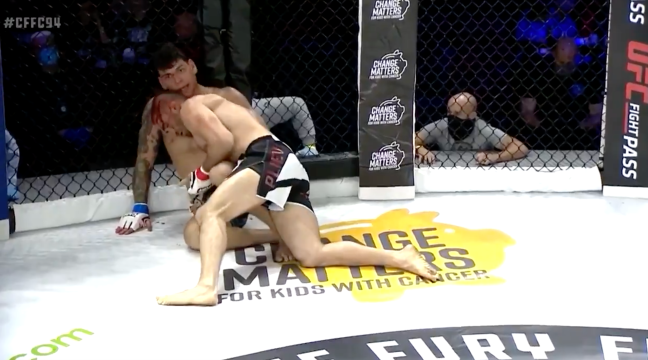 I want to begin by saying that this is not an April Fools joke. A MMA fighter’s finger is actually still missing after it was ripped completely off, and CM Punk, the former WWE Superstar, made things really awkward.

Khetag Pliev suffered a severed finger during his middleweight bout against Devin Goodale at CFFC 94 on Thursday. The Cage Fury Fighting Championships is widely considered the High-AA to the UFC’s MLB, to use baseball terms, and Pliev is a 37-year-old lunatic from Canada the goes by “the Terminator.” He actually wrestled for his country in the Olympics

He was fighting Devin Goodale on Thursday and had his finger fall off into his glove during the first round, but the referees didn’t notice right away. The fight continued until Pliev went back to his corner and came to the realization himself. Professional wrestler and mixed martial artist fighter CM Punk and MMA commentator John Morgan were on the call and they were both astonished.

This man fought a FULL ROUND with his FINGER RIPPED OFF. #CFFC94 😩pic.twitter.com/JWSofdLB7j

The PA in the arena had to come on and let everybody to check under their seats for a finger like a very, very shitty Oprah. That means that Pliev’s finger snapped clean off in the glove during the fight, he continued to run on pure adrenaline through the remainder of the round, took his glove off, and the finger was gone. Eventually, it was found to be in the glove the whole time.

They just made a PA announcement at #CFFC94 that they are trying to locate a fighter's missing finger.

It evidently fell off into his glove during the bout and is missing somewhere in the venue.

To make things even more awkward, after the fight was declared a TKO, CM Punk interviewed the winner and Goodale had no recollection of anything. He made it explicitly clear that he cannot rememberthe fight because of the strikes he took to his head and CM Punk pauses completely dumbfounded by what just happened. Goodale’s attitude shifts and he appeared to have realized what he was saying, even though it is likely the standard in the sport. CM Punk should know that to some extent by nature of his background, and to a full extent by common sense, but I can see how it is very hard to continue broadcasting through something like “I can’t remember anything, I don’t know.”

With the fighters being completely blacked out, there is not a high probability that we will ever know when the incident happened. We can only speculate about the replay above, which shows Pliev’s hand being pulled in the grapple after a kick appears to have broken it earlier on.

The second kick is where the finger gets broken #CFFC94 pic.twitter.com/7AeJktkJuk

Both guys were bleeding throughout the evening, but nothing was out of the ordinary.

“It wasn’t a compound fracture, a break, it wasn’t a dislocation, a break, a laceration. His finger was just gone. It’s gone,” CM Punk said.

Pliev is officially the baddest dude on the planet despite the result. His finger was reattached with emergency surgery after the fight and the doctor said that he tore 50 percent of the tendon. The images are rather gruesome and it seems like he tore more than just a tendon to me. What do I know, but his finger was literally unattached.

IF YOU DO NOT WANT TO SEE HIS FINGER, STOP READING NOW.

IF YOU DO, KEEP SCROLLING
D
O
W
N.

A dude just had his F*CKING finger kicked off his hand @ufc.

The F*CKING finger is GONE.

He finished the round.

What the F*CKING FUCK! #CFFC94 pic.twitter.com/1X6wsGfyhs