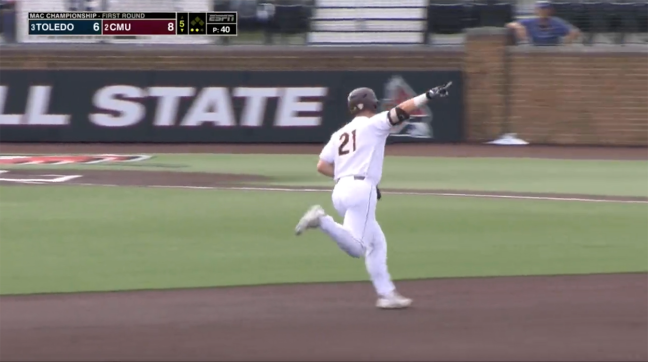 Wednesday’s college baseball game between Central Michigan and Toledo was the most chaotic, exhilarating game that you weren’t watching. The Chippewas and Rockets took to the diamond for a Mid-American Conference tournament game that came down to the final pitch.

After No. 3-seed Toledo put a run on the board in the top of the second inning, No. 2-seed Central Michigan answered. That was the case again in the third inning after the Rockets put up a five-spot and the game went tied at six into the fourth.

From there, the Chippewas scored two runs in the fifth inning with a bomb.

But their opponents tied things back up with one run in the sixth and seventh innings. Neither team scored in the eighth and the game went tied to the ninth.

That’s when things got (even more) interesting. Toledo’s first batter of the inning started it things off with a dinger.

And the second batter of the top half of the ninth followed it up with another tater to take a two-run lead that held to the bottom half.

We have liftoff… 🚀@MasonJsykes with the back-to-back jack to give the Rockets a 10-8 lead headed to the bottom of the 9th.@ToledoBaseball | #MACtion pic.twitter.com/7jfTK50Qcn

But Central Michigan was not rolling over. After a few singles, a hit by pitch and a walk that scored a run, the Chippewas found themselves down by one run with the bases juiced and one out.

What happened next was a total choke job by the Rockets. The pitcher walked in the game-winning run to lose the game and have their season come to a close.

To make matters worse, the Central Michigan batter proceeded to launch his bat into orbit and bat-flipped a walk-off walk.

No. 2 @CMUBaseball moves on in the winner’s bracket after a 11-10 win over No. 3 Toledo. #FireUpChips | #MACtion pic.twitter.com/LBsPhWjym4

It was vicious, but after such a crazy game, the emotions were high. Baseball is a weird sport and Wednesday’s walk-off walk is the perfect example. What a blast!