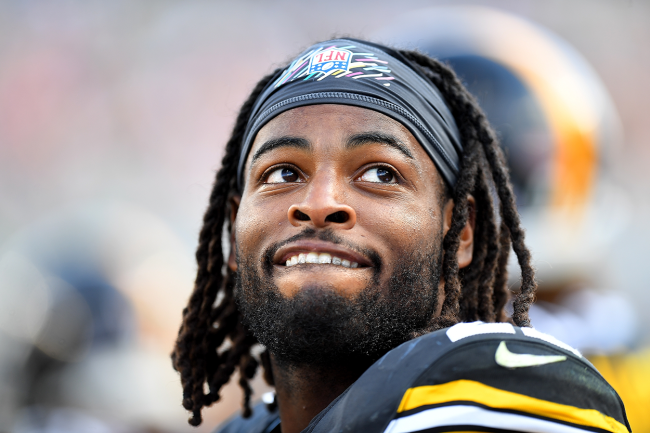 I have no idea who Chad Forbes is, but he is a self-proclaimed “NFL aficionado” who is a “frequent contributor on national & local radio” with 18.8k followers on Twitter. He is also a moron.

Earlier this afternoon, Forbes questioned whether Najee Harris is good at football.

Is Najee Harris even good? Feels like we’re mistaking volume for production. Yes, he wins an extra yard when needed. He’s a big back. But he’s not anywhere close to peak Le’Veon Bell.

Yes, he is talking about Pittsburgh Steelers running back Najee Harris. The one who was just named October’s rookie of the month and currently leads all rookie running backs in rushing.

Before I begin to eviscerate this Forbes fella, let me make one thing clear— very few running backs are as good or ever will be as good as peak Le’Veon Bell. But to compare a rookie to one of the greatest running back seasons in history is truly ridiculous.

However, just for fun, let’s compare the stat lines of each running back through their first eight games:

Hmmmmmmm. Well, what if we expanded this pace out to the full season? Well, Mike Frazer did that work for us, because Forbes was too unintelligible to do so himself:

Chad, do your friggin' research.

As this terrible take makes waves across the internet, one Twitter user seemed to have found the source for this absurdity. Nobody is engaging with Forbes — probably because of takes like this — so perhaps he needed some help with the numbers and went full send?

when you have 19K followers and get zero engagement so you need to tweet about the steelers https://t.co/9JrB17vmVE pic.twitter.com/Xk0A2g7XLH

If that not the case, Forbes is simply not a smart guy. I’m leaning toward the latter.