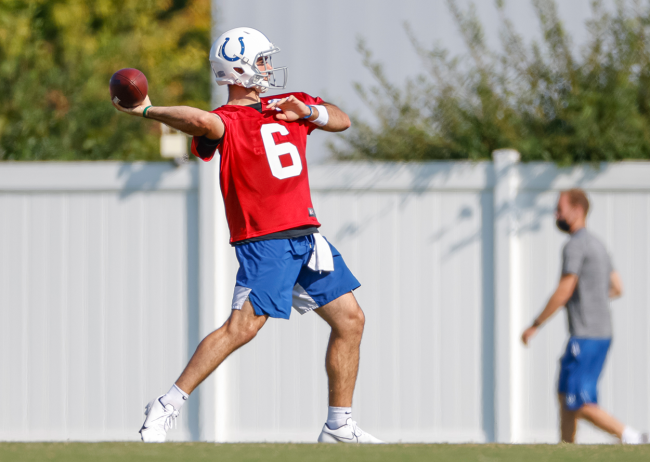 Canadian Football League teams will report to training camp on May 15th. When they do, Chad Kelly will be among them.

Kelly, who has not played professional football in two years, signed with the Toronto Argonauts back in February. The Swag has been unlocked.

We locked in !!!! Kelly 12, in the double blue !! #CFL @TorontoArgos pic.twitter.com/scmVmVUdWb

Kelly, who just turned 28, hopes to ball out in the Great White North and draw interest from the NFL. The Argonauts become immediate Grey Cup contenders by singing Kelly and it’s all because of his natural ability to sling the pill.

Before reporting to Toronto, Kelly has been putting in work at his alma mater, Ole Miss.

His footwork, agility and quickness, an underrated part of his game, look to be as athletic as ever.

And, as always, his arm strength remains extremely impressive. Kelly never quite got a fair shake in the league but he can throw a deep ball with the best of them. He can huck it.

When Chad Kelly arrives in The 6 for Argonauts training camp next month, he will be on a professional roster for the first time since September 30, 2020.

Although his NFL career didn’t quite go as planned, what Kelly did with the Rebels cannot be overlooked. He is one of the best quarterbacks in school history and some would put him ahead of Eli Manning.

Kelly was drafted by Denver after two years at Ole Miss and played four years between the Broncos and the Colts, but he never threw a pass in a regular season game. That didn’t keep the nephew of Hall of Fame quarterback Jim Kelly from making a strong impression with his rocket arm and sneaky wheels.

Colts head coach Frank Reich was impressed with the SEC’s leading passer from 2015 and entered the preseason in 2020 with a favorable outlook.

“I cannot tell you how happy we are with Chad,” he said that year. “He’s progressed a lot as a quarterback. He really works hard at it. He knows how to fight. He’s a good teammate. He has worked with Phil Simms. He’s really worked hard at his craft and continuing to improve.”

Based on Indianapolis’ recent win/loss records, it was their mistake.

After his brief stint with Indianapolis, Kelly partook in Ole Miss’ 2021 Pro Day. He also worked out with the Bills and the Packers, but did not make either squad.

Perhaps more notably, Kelly was suspended by the NFL in May of 2019 for violating the league’s personal conduct policy after he got a little too turnt at Von Miller’s Halloween party. According to a police report from his arrest, he toddled into the house of someone he did not know and proceeded to sit on the couch, “mumbling incoherently” aside the homeowners. Kelly, who was dressed similarly to Woody from Toy Story, only left after one of the residents chased him out with an aluminum vacuum tube.

Swag has since cleaned himself up and is looking to showcase his skills in the CFL. People forget that there is a legitimate case to be made for Kelly being the greatest single-season quarterback in Ole Miss history.

In addition to his on-field play, he has all of the intangibles. He is the highest-rated quarterback in Sports Science history, even over Patrick Mahomes.

In 2015, his only full season in Oxford, Kelly led the Rebels to a 10-3 record with a road victory over eventual national champion Alabama and a decisive Sugar Bowl win over Oklahoma State. Kelly led the SEC with 4042 passing yards and 31 passing touchdowns that year. He was better than Dak Prescott, Kyle Allen and Will Grier, among others.

Kelly has the physical traits that teams are looking for and his most recent workout videos show that he’s still got it. He can take off and use his feet to break down a defense when necessary, and he throws the deep ball better than most of the league.

The Argonauts officially begin the 2022 season on June 16th. Mark your calendar because Chad Kelly is about to dice up Canada and it’s going to be awesome.