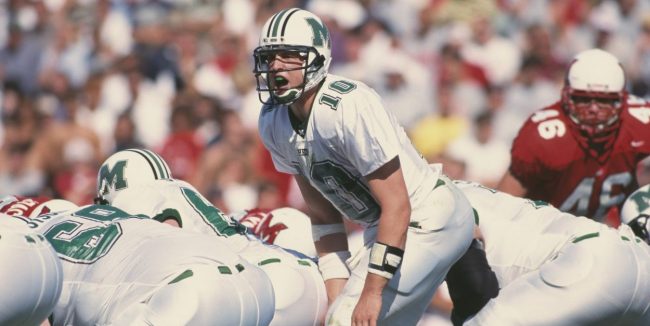 Chad Pennington’s son Cole is a near splitting image of his father. The 6-foot-2, 196-pound high school senior plays a little bit smaller than his dad and his hair is a little bit curlier, but their features and play are incredibly similar. 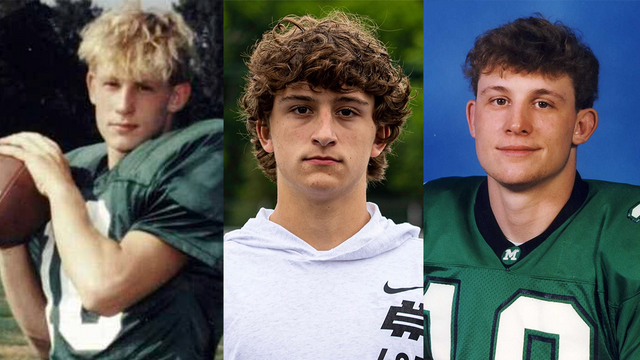 Chad, who spent ten seasons between the New York Jets and Miami Dolphins, played his college career at Marshall. In his senior year with the Thundering Herd, he led the program to an undefeated 13-0 record, a top-10 ranking and finished fifth in the 1999 Heisman Trophy voting.

Now, 22 years later, Cole is following in his patriarch’s footsteps.

The three-star prospect from Lexington is staying in-state and committed to Marshall back in June. He made it official on Wednesday and signed his National Letter of Intent.

Chad is currently the head coach and director of football at Sayre School, where Cole spent the last two years as the starting quarterback. By committing to play for the Herd, he became the first player in the school’s history to earn a Division-I scholarship.

“First and foremost, thanks to my Lord and Savior Jesus Christ,” Cole said on Wednesday. “I’ve always dreamed of playing college football and I can’t thank the Marshall football staff enough for giving me this opportunity. I’ll give everything I have to be the best student-athlete I can be and represent this university with integrity.”

His father, looking on, was also very proud.

I asked Sayre HC @ChadPennington how Chad the parent is doing today. He says "while we're celebrating, we are also reminiscing."

Pennington will arrive on campus next year and his starting spot is not a guarantee. In fact, it is far from it.

Marshall’s starting quarterback Grant Wells will be a redshirt sophomore next season with at least three years of eligibility remaining. He played really well in 2021 and is likely to be the incumbent.

However, Pennington is quite the baller and could make his case, if not next season, than before he graduates.

In his two seasons as the starter at Sayre, he passed for more than 4,000 yards and 47 touchdowns, completed 70 percent of his passes and added nine touchdowns on the ground.

If that wasn’t enough, he intercepted six passes and made 70 tackles as a safety. He is also a starter on his basketball team.

When it comes to their playing style, as might be expected, Cole and Chad are both very similar. They are both right-handed and their mechanics are nearly identical.

Cole is a lot of fun to watch spin the pill.

Part of the reason that he was not as highly-coveted as one might expect from the son of Chad Pennington is his size. He showed up to his first evaluation at 6-foot-1, 177 pounds.

Cole will have to get in the weight room on campus at Marshall, but if he can build out his frame, he could find himself with a real chance to do what his father did at his alma mater. Wouldn’t that be something?

In case you need a refresher on just how good Chad Pennington was at Marshall, here he is throwing five touchdowns to Randy Moss:

Do you feel old yet?