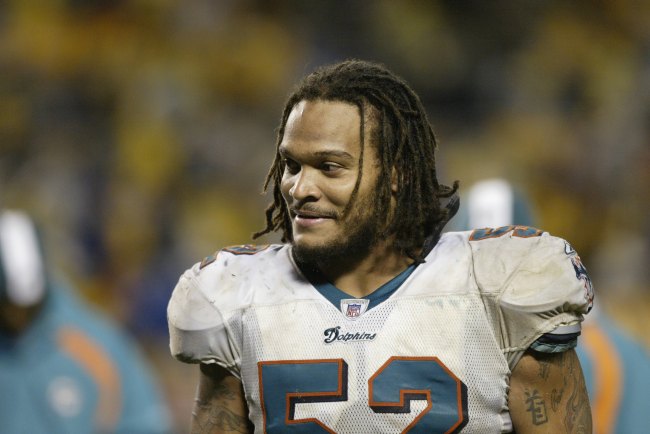 Retired Miami Dolphins LB Channing Crowder may have just broken the ultimate man code while talking about what it’s like to live on the road as an NFL player.

During a recent episode of the “I Am Athlete” podcast, Crowder spilled the beans on how easy it was for NFL players to cheat on their wives while on the road as his fellow former athletes on the podcast hilariously tried to deny everything he said.

NFL players really be LIVING LIFE on the road 😭 pic.twitter.com/tmP75Jqlas

Channing Crowder: They’re talking about they ain’t with their wife, they’re still getting sex if they’re on the road. If you didn’t get sex on the road, you ain’t got no game.

Fred Taylor: I’m drinking I’m not having anything to do with that conversation.

Channing Crowder: There were women sitting outside of the hotel, all you had to do is go upstairs and come back down.

Chad Johnson: That happened for real?

Fred Taylor: I played for the Jaguars, we were sorry, nobody waited for us.

Channing Crowder: The Dolphins was terrible but I could always sneak downstairs by that bar and find me someone smiling.

Brandon Marshall: I’m cutting this off.

Channing Crowder When you walked in the visiting team hotel you saw fans lined up behind the little ropes, and behind them there were another row of people. Behind the second row there were girls sitting back there with skirts on. I would sprint upstairs to get my bag in the room and sprint right downstairs.

NFL fans thought it was hilarious that Crowder snitched on players about cheating on their wives on the road.

Chad Johnson should win an Oscar for pretending to not know that he could get laid after away games during his NFL career https://t.co/eVMI3SU9o3

😂😂😂 nobody wanted parts of that conversation https://t.co/k0nrZwUtN8

"I have no Heavenly idea what you're referring to Sir" –@ochocinco pic.twitter.com/43WzmU3z3i