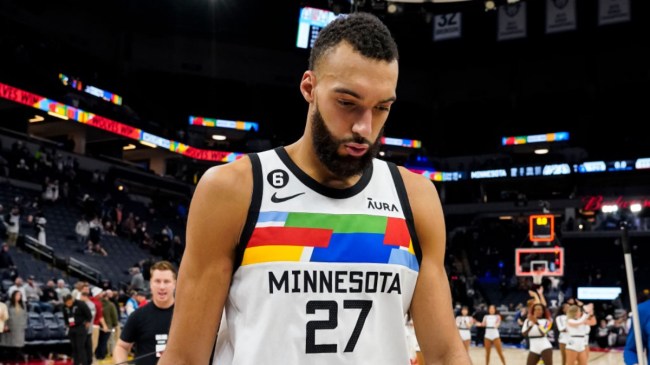 Last season, the Minnesota Timberwolves made just their second playoff appearance since the 2003-04 season.

With the hope that they might be able to take another step forward this season after being eliminated in the first round, they decided to make one of the NBA’s biggest moves of the offseason.

At the time, the deal was met with some skepticism as the team already had Karl Anthony-Towns and observers weren’t entirely sure how the two big men would mesh.

There were also questions about whether or not they were overpaying for a 30-year old who offered limited offensive ability.

Throughout this season, those concerns have proven to be valid. The Timberwolves currently hold a 22-23 record and find themselves in 9th in the Western Conference standings.

Last night, Charles Barkley shared his thoughts on the trade. According to Barkley, the trade for Rudy Gobert was the worst trade in NBA history.

"The Timberwolves made the worst trade in NBA history… That was so stupid that trade."

It may be a bit early to call it the worst trade in league history, especially in a world where the Brooklyn Nets’ trade for Kevin Garnett and Paul Pierce exists, but Gobert’s time in Minnesota is definitely off to a bad start.

Gobert has seen his numbers dip since joining the Timberwolves and the team as a whole has seen their play decline. Their offensive rating, defensive rating, and net rating are all worse right now than they were last season.

The one positive for the Timberwolves is that these picks still don’t look like they’ll end up in the top 10 of the draft, which means they at least shouldn’t have to worry about missing out on somebody like Jaylen Brown because of this trade like the Nets did in their disastrous deal.

Still, the Minnesota Timberwolves are definitely not getting what they paid for in this deal.