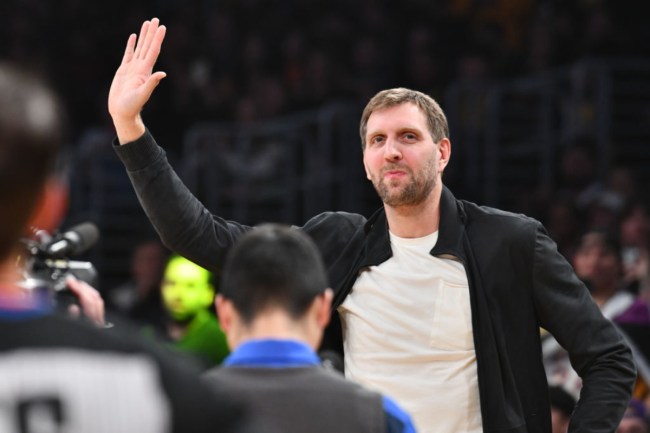 Dirk Nowitzki had the opportunity as a teenager to take the floor with Michael Jordan and Scottie Pippen during a Nike exhibition game in Germany. Charles Barkley also happened to be there and to say he was impressed by Dirk would be a vast understatement based on this particular story.

As Barkley tells it, Nowitzki put on a show in the first half of the game dropping 25 points with Scottie Pippen, one of the best defenders ever, guarding him. Barkley told Pippen at half to go lock Nowitzki up, but that didn’t happen, according to Barkley Dirk finished the game with 52 points.

That was all Barkley needed to see, he wanted Dirk to sign with his alma mater, Auburn, and he was willing to do whatever it took to get him there.

“I called Nike. I said, ‘Find about this kid. Tell him I’ll give him anything he wants to go to Auburn,’” Barkley explained. “Anything he wants, we’ll get it done.”

The Chuckster tells the story of how Dirk Nowitzki was headed to the Army when they first met. pic.twitter.com/BarfkAcl5J

The rest is history, of course.

Nowitzki played in Germany from 1994-1998 before passing up many college offers and declaring for the NBA Draft. The Milwaukee Bucks drafted him ninth overall in 1998 and dealt him to the Dallas Mavericks.

During his 21 years in Dallas, Nowitzki was named league MVP in 2007, was a 14-time All-Star, and helped lead the Mavs to a title in 2011, when he was named Finals MVP. He also has his No. 41 jersey hanging in the rafters at American Airlines Arena in Dallas.