Charles Barkley Calls Shaq A ‘Karen’, Tells Him ‘Kobe And Dwyane Wade Carried His Fat A–‘ During Argument On Inside The NBA 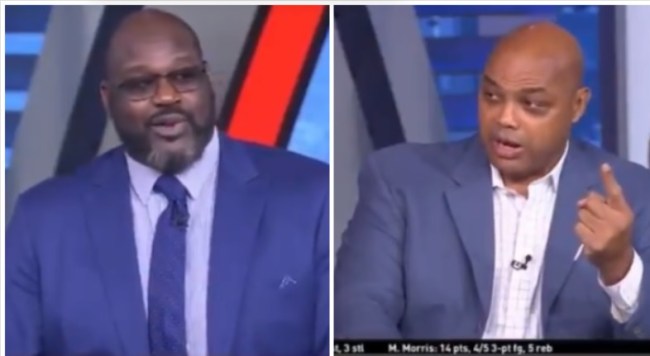 Charles Barkley and Shaq are the funniest duo on the best sports show on the planet and they shined on Thursday night in what was the highest-profile day of the NBA bubble season so far.

While arguing about the Blazers defense during halftime of Portland’s game against Brooklyn on Thursday night, Barkley took a low blow at O’neal and reminded him that he was a “carried” by Kobe Bryant and Dwyane Wade during his career.

Charles Barkley and Shaq going at it. 😂😂

The two continued to argue and Barkley hilariously referred to Shaq as a “Karen” and told him to stop yelling at him.

Earlier in the night, Shaq blasted Barkley for being hypocritical after called for Giannis to be suspended for more than 1 game for headbutting Mo Wagner on Wednesday night.

Barkley said Giannis should get more than a one game suspension so Shaq brings up some memories😂 pic.twitter.com/0drlDu8Wan

Thank God the NBA is BACK in full swing and we get to watch Barkley and Shaq go at it every night.