Cheez-It Made The Ultimate NIL Move For Bowl Season 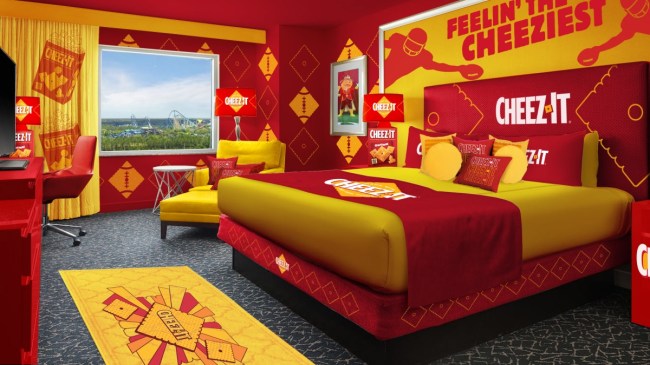 It’s just about to be college football bowl season and that means it’s just about time for Cheez-It to re-establish themselves as the nation’s most committed bowl sponsor. During bowl season, there is no brand that commits making their event special like Cheez-It.

Over the years, they have taken major steps to make the most of their event. They have created food items specifically for the game in the past and the Cheez-It walking taco was awesome. They have given out more Cheez-Its than any fan would possibly know what to do with.

Now they are once again diving in for bowl season. Today, they announced that 4 players competing in this year’s Cheez-It Bowl and Cheez-It Citrus Bowl would get the chance to stay in the “Feelin’ the Cheeziest” hotel rooms before the game.

You can literally wake up feelin’ the cheeziest during our bowl week in Orlando!

There's more: select fans will be allowed to stay at replica hotel rooms on the field at Camping World Stadium the night before the Cheez-It Bowl.

The rooms may look a bit over the top, but this is an awesome move from Cheez-It as they continue to maximize their opportunities during bowl season.

This will be an unforgettable moment in the lives of whoever the fans are that end up getting to watch a bowl game from the Cheeziest seat in the house.