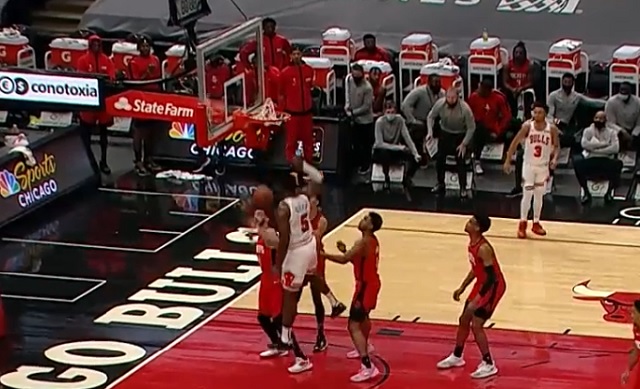 Chicago Bulls announcer Stacey King is known for colorful commentary, but he may have crossed a line with his latest call.

During the Bulls preseason-opening game against the Rockets, Bulls big man Noah Vonleh dunked on a Rockets player with 12 seconds left to go in the game. After the dunk, King blurted out”open your mouth wide and take it.”

NBA fans were stunned at King’s comment which appeared to be sexual in nature.

Yikes Stacey King…."Open your mouth and take it" should not be words that are used in basketball. Especially from a play-by-play announcer #NBA #Bulls #NBATwitter pic.twitter.com/hBksBTaju1

What be goin on to where they think thats a normal response to a basketball game??? That mf is sick https://t.co/N9T6DNG2Pc

Noah Vonleh dunked on someone and Stacey King’s reaction was yelling “open your mouth wide and take it” on national TV. pic.twitter.com/zrlSktviwq