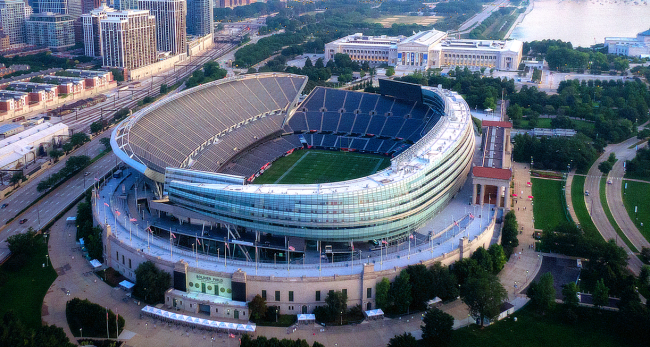 Back in 2002, the Chicago Park District decided it was time to make some renovations to Soldier Field, the home of the Chicago Bears.

It was pretty much a disaster.

The Bears spent the entire 2002 NFL season playing home games 134 miles from Chicago in Memorial Stadium at the University of Illinois in Champaign.

The renovation cost $632 million – $432 million of which was paid for by taxpayers in the state.

It lowered seating capacity from 66,944 to 61,500, making it not only the oldest stadium in the NFL, but the smallest.

Soldier Field, which opened in 1924, also lost its landmark designation because of the changes.

And it was ugly.

Prominent architect Stanley Tigerman called it “a fiasco.” Chicago Tribune architecture critic Blair Kamin called it the “Eyesore on the Lake Shore.” Pretty much everyone else commented that it looked like a spaceship landed on the stadium.

So what is current Chicago Mayor Lori Lightfoot proposing now? Slapping a dome over the “Monstrosity of the Midway.”

A Chicago mayoral committee is “poised to recommend that the city ‘explore the feasibility’ of putting a dome atop Soldier Field in an effort to make the facility more attractive to potential users,” including the Bears. But the “dome ‘almost certainly’ will require some sort of taxpayer subsidy.” No cost figures for the dome are listed in the draft report, but sources said that estimates of $400M to $1.5B “have been mentioned.”

How would Soldier Field look with a dome?

We made some mockups pic.twitter.com/NG9lbmSlkW

That sound you hear are Bears fans and Illinois taxpayers collectively saying, “Here we go again.”

Soldier Field is not historic anymore. It doesn't evoke anything besides the utter failure of several different ideas stacked on top of each other. Don't shove a half-assed dome on it, just bulldoze it.

Putting a dome on top of Soldier Field is like putting the wrong cover on a Tupperware container. https://t.co/o7LoLe52KB

Back in 2021, the former site of the Arlington Park horse racing track in suburban Chicago was being discussed as a possible location for a new stadium for the Bears. Unfortunately, moving there would mean the Bears having to break its lease with Soldier Field, costing the team tens of millions of dollars – money that, this time, would not come out of taxpayers’ pockets.

Putting a dome on the roof of Soldier Field isn’t going to solve all its problems. Location is horrible, seating is lowest capacity in the NFL, plus it’s owned by the park district and limits the team all together. They’ve already started the new stadium process, it’s over, city. https://t.co/VSq4oXo7pb