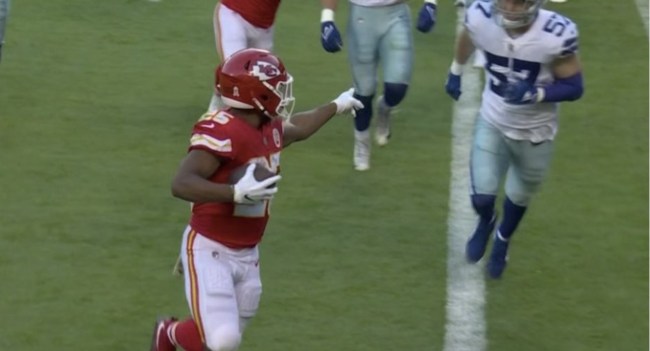 The NFL’s emphasis on taunting penalties this season has gotten out of control.

Earlier this week Bears head coach Matt Nagy went viral when he said he agreed with the taunting penalties because kids are watching and he didn’t want them to think disrespecting people is ok.

“It’s an exciting game. It’s a game that’s very emotional. But there are times that some people are egregious with celebrating and it can be over the top. And I think probably the biggest message is, let’s calm this down a little bit because people watch and people want to see a little bit of respect. A little bit of doing things the right way.

“It doesn’t mean you can’t have fun, but there’s young kids right now that are watching games, and what happens is you go to one of these sporting events and you might see some imitation going on that’s taking it over the top. I’m a firm believer in respect and just kids growing and watching and we have a huge platform as leaders. I’m talking players and coaches.”

Despite the fact that fans dislike the taunting penalty it seems like the NFL keeps doubling down on it every week.

During Sunday’s Chiefs-Cowboys, running back Clyde Edwards-Helaire was penalized for pointing at a defender while running into the end zone.

Clyde Edwards-Helaire was called for taunting because he pointed at #Cowboys LB Luke Gifford.

Not sure how Gifford will recover from that. pic.twitter.com/80QCqNJg5b

Clyde Edwards-Helaire pointed a finger at a defender and got a flag for taunting.

The taunting thing is one of the dumbest things a pro sports league has done in this lifetime.

That taunting call in the KC game was such unbelievable trash. Absolute, garbage wrapped inside trash wrapped inside rotting fish rolled up in a newspaper. The NFL should be freaking ashamed of itself.