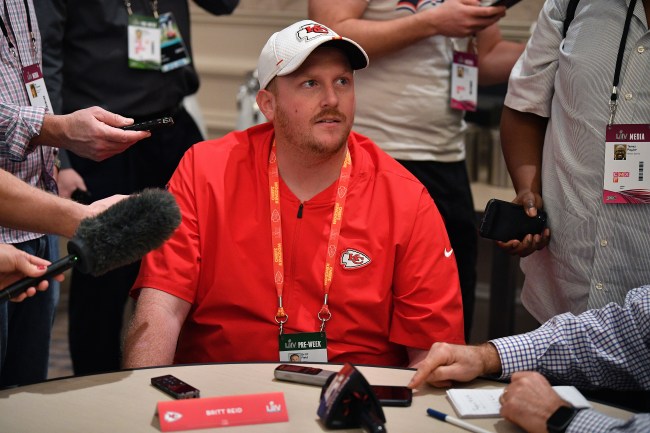 Chiefs assistant linebackers coach Britt Reid, son of head coach Andy Reid, admitted to drinking alcohol before a car accident on Thursday night that injured two young children just days before the team was set to leave for Super Bowl LV in Tampa, Florida. One of the children involved in the crash suffered life-threatening injuries according to a report released by the Kansas City Police Department.

The crash happened shortly after 9 p.m. on Thursday on southbound Interstate 435 near Eastwood Trafficway, which is one exit south of the Chiefs’ practice facility at the Truman Sports Complex.

According to Kansas City, Missouri, police, a Chevrolet Impala that had run out of gas was sitting on the entrance ramp from Stadium Drive to I-435.

The driver had called family for help, which arrived in a Chevrolet Traverse and parked in front of the disabled car.

While attempting to get the vehicle running again, a white Dodge Ram Laramie Sport pickup truck traveling on the entrance ramp — which Britt Reid admitted to police he was driving, according to a search warrant — struck the left front of the stranded Impala.

The driver of the stranded vehicle was inside the car at the time and wasn’t injured, but the Ram truck continued forward and also struck the right rear of the Traverse.

Both children were transported to a local hospital for treatment.

According to police on the scene, Reid, whose eyes were reportedly bloodshot red, admitted to having two or three drinks before the crash. Officers went on to draw blood from Reid to test his alcohol levels after he arrived at the hospital.

According to a search warrant filed just before midnight Thursday, a KCPD officer said they could smell “a moderate odor of alcoholic beverages” and that Britt Reid’s eyes were bloodshot and red.

Britt Reid told the officer he’d had two to three drinks, according to the search warrant application.

The officer wrote in the warrant that he observed signs of impairment, after which Reid complained of stomach pain and was transported to an area hospital for treatment.

Once at the hospital, the officer requested a blood draw from Britt Reid and a Jackson County judge approved the request.

The Chiefs released a statement following the crash to say they were gathering information on the matter.

Chiefs’ OLB coach Britt Reid was involved in a car accident that Kansas City now is commenting on: pic.twitter.com/tsKNtvcV9k

Britt Reid pleaded guilty to DUI in 2008 after driving into a shopping cart in a parking lot while under the influence of a controlled substance.