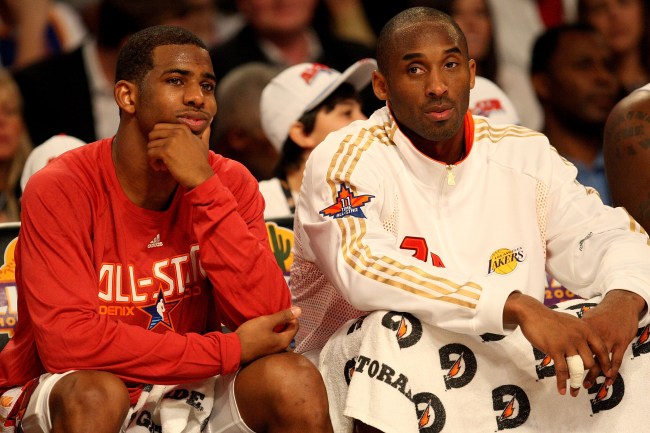 Back during the 2011 NBA season, Chris Paul was all but ready to pack his bags and head from the New Orleans Hornets to join the Los Angeles Lakers, with a trade being agreed upon by all teams involved — which was supposed to reshape what the league looked like. Of course, it all fell through, as then NBA Commissioner David Stern vetoed the deal, which was even more shocking than the trade itself would’ve been.

While Paul was supposed to team up with Kobe Bryant and compete for titles for the next decade, the whole idea got snatched from him in a matter of hours — and you better believe he was pretty pissed off about the idea being quashed.

Recently joining Quentin Richardson and Darius Miles on the Knuckleheads podcast, Chris Paul described how livid he was about the league vetoing the deal, and openly chatted about how he had already talked to Bryant about some of the expectations and possibilities while playing together. Take a look below at Paul’s admission of anger.

“I was on the phone with my brother and my agent, and all that. We figuring out a plane to get to New Orleans to get us to LA … let’s just say my agent clicked over, said hold on, clicked over and then he came back on and he was like, stuttering. And we was hot. We was hot. Me and Kobe had talked, you know what I’m saying? We had talked already and all that. And it was a lot. It was a lot.”

Yikes, talk about a real tease, huh? That’s like planning a vacation for the past year only to be told you can’t go because there’s a global pandemic going on in the world that prohibits travel. Yeah, that’s pretty much exactly what it’s like — and a lot of us know firsthand about the anger that that brings.

There are a lot of “what if…?” questions in sports history, but trying to figure out how successful the Lakers would’ve been with both Chris Paul and Kobe Bryant in the backcourt together is one towards the top of the list. I mean, shit, the deal was agreed upon by the teams and all but done, and it was assumed the Lakers — who were a year removed from a championship — were bound to create a new dynasty.

Although the 2011 trade to the Lakers fell through, even a decade later, Paul and some of the people involved still aren’t over the fact that it didn’t go down as expected. Considering Paul has yet to win a title in his career, he’s probably even more pissed off about Stern calling the deal off.