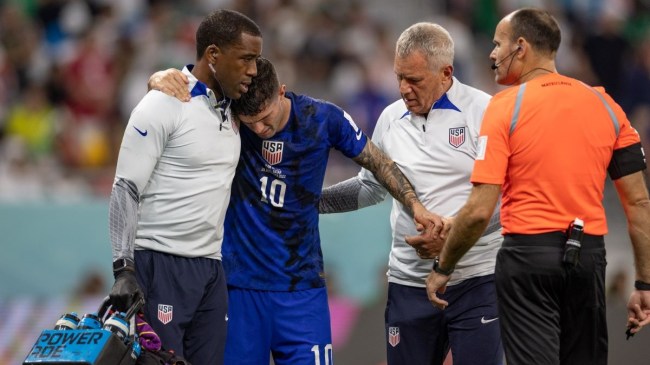 When the US Men’s National team needed a hero, Christian Pulisic delivered.

The US entered Tuesday’s FIFA World Cup Group B match against Iran knowing that only a victory would see them advance. The Yanks struggled to create much in the way of goal-scoring opportunities against both Wales and England.

Pulisic, who has been the star of the USMNT since breaking onto the seen as a 17-year-old at Borussia Dortmund, delivered with a big goal to give the US a 1-0 win. Though it came at a cost. Pulisic slid directly into the Iranian goalkeeper while scoring and caught an apparent knee below the below. He was substituted off at halftime and later taken to the hospital for what US Soccer called a pelvic contusion.

Thankfully, the USMNT star appeared to be in good spirits after the match. Pulisic posted a picture of himself in the hospital on social media after the match and declared that he’d be back in time for Saturday’s match with The Netherlands.

Since then, the US has officially listed his status as “day-to-do” and he offered some clarification of the injury on Thursday.

The video of the incident and Pulisic’s reaction indicated that he received a knee to the family jewels from the goalkeeper. But he’s now saying that isn’t the case.

For the #USMNT fans concerned about Pulisic's injury, he did confirm that he "didn't get hit in the balls."

He took the Iranian goalkeeper's knee to the area at the lower end of the abdominal wall, likely the pubic bone.

"The bone is there for a reason" Pulisic said. pic.twitter.com/2oatFlzVmb

Pulisic made a point to state that he did not, in fact, get him in the nuts.

“I didn’t, like, get hit in the balls,” he said. “I’m alright, I’m alright. It was very painful, it’s just, that bone is there for a reason, to protect you. It was sore. Like I said, I hit it well.” – via The Athletic

Well, that’s a relief. But a pelvic contusion sure sounds pretty painful in its own right. Pulisic now has 48 more hours to get himself right before yet another win-or-go-home match.