Oklahoma State’s Chuba Hubbard Gets Heated Over Mike Gundy’s T-Shirt, Says He Won’t ‘Do Anything’ With School ‘Until Things Change’ 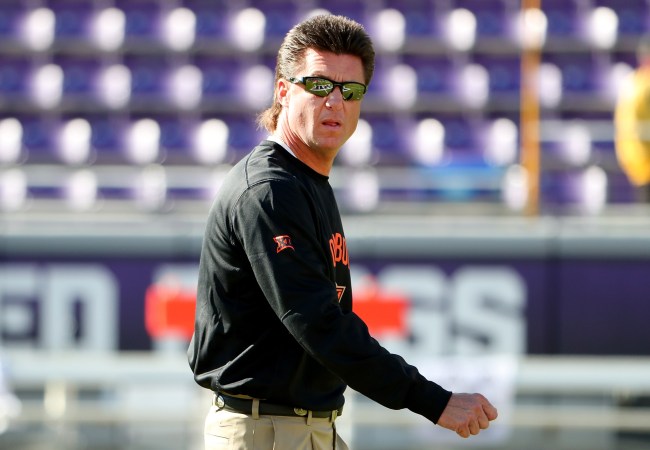 It appears as if Mike Gundy went fishing recently and Oklahoma State running back Chuba Hubbard, one of the best backs in the nation, didn’t like the shirt Gundy decided to wear.

A photo from Facebook, which is dated June 10, surfaced on Twitter on Monday showing Gundy wearing a One America News (OAN) t-shirt. OAN is viewed as a right-wing cable news network with headquarters in San Diego.

Hubbard reacted on Twitter stating “I will not stand for this.. This is completely insensitive to everything going on in society, and it’s unacceptable. I will not be doing anything with Oklahoma State until things change.”

I will not stand for this.. This is completely insensitive to everything going on in society, and it’s unacceptable. I will not be doing anything with Oklahoma State until things CHANGE. https://t.co/psxPn4Khoq

The rising junior was the Big 12 Offensive Player of the Year a season ago after rushing for more than 2,000 and 21 touchdowns for the Cowboys. If he does end up ‘not doing anything’ with the school it will be a massive blow to Gundy’s team, to say the least.

It’s well within Gundy’s rights to wear whatever he wants to wear, it’s also well within Hubbard’s rights to call his coach out for his shirt. It’ll be interesting to see if Gundy will be without his best player because of a t-shirt he decided to wear and a random photo on Facebook.

Spin zone: nobody wears good t-shirts to fish in, maybe Gundy was ready to get this t-shirt filthy then throw it away after a long day on the lake.