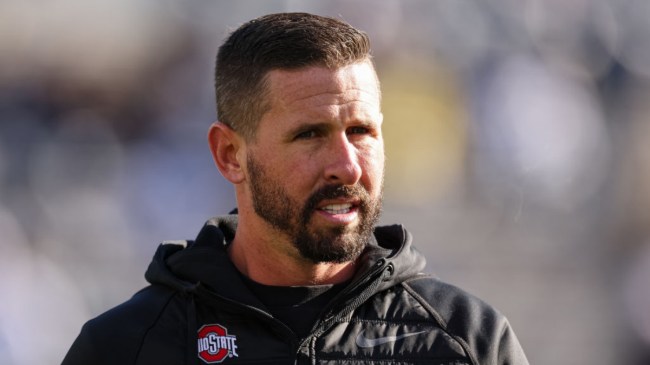 Ohio State has surprisingly found themselves at the center of a number of coaching rumors recently.

Most of those center around the idea that they could fire Ryan Day as a result of him losing to Michigan, dropping his career record against the Buckeyes’ rival below .500. Fans have speculated that the team could bring back Urban Meyer to return Ohio State to the heights they reached under him.

Today, there was even ridiculous speculation that Mike Vrabel could leave the Tennessee Titans to coach his alma mater despite the fact that he’s already making a bunch of money coaching the NFL and has the Titans in position to win the AFC South for a 3rd consecutive season.

Now they have become the subject of a much more believable report.

According to a report from Buckeye Scoop, Ohio State wide receiver coach Brian Hartline is interviewing for the Cincinnati head coaching job.

The Cincinnati job recently opened up with Luke Fickell deciding to leave to take over at Wisconsin.

There might not be a coach in college football right now who has coached a more successful position group than Hartline. Since Hartline took over as the Ohio State wide receivers coach in 2018, 4 Buckeyes have been drafted in the first 3 rounds of drafts. That includes Chris Olave and Garrett Wilson, who both went in the top 15 this year.

The Buckeyes also have 2 of the most highly touted receivers currently playing in the college ranks in Jaxon Smith-Njigba and Marvin Harrison Jr.

Cincinnati is just a year removed from a College Football Playoff appearance and while they weren’t quite as good this season, they still managed to put together a 9-3 record.

Hartline couldn’t ask for a much better first head coaching job and he could be a very good fit for the Bearcats as they try to remain one of the stronger mid-major programs in the country.