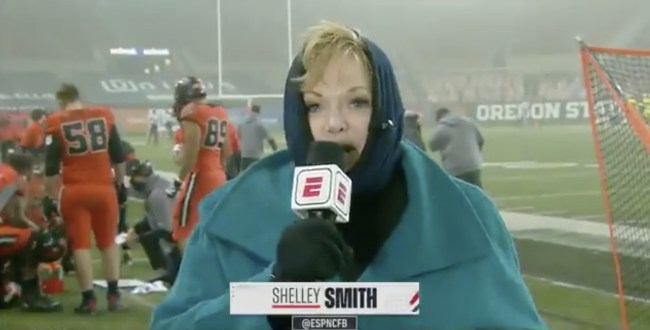 The Civil War was played on a cold, wet Friday night day in Corvallis, Ore. as Oregon State played host to Oregon in a primetime Pac 12 rivalry. It was a cold and foggy night for 124th matchup between the two teams separated by 47 miles. This year, without fans, the tension was felt on a lesser extent but it remains one of the nastiest and most contentious rivalries in the nation

ESPN sideline reporter Shelley Smith told a story about a time when fans were in the stands at the northern most school and recalled being at the game with her niece, an Oregon fan, who was hit in the head with a chunk of ice.

“It really is one of the nastiest rivalries in all of college football,” Smith said. “How do I know? I’ve been to a bunch of them. Once I was here with my niece, Vanessa, who was wearing her Ducks jacket and she got hit in the head with a chunk of ice. It didn’t knock her out but it knocked her silly.”

It was 37 degrees with a consistent, slight mist and thick fog on Saturday, so Smith is doing her best to keep warm and dry as she tells the tale of her experience amongst Beavers fans. The Ducks have been dominant in recent years and took a lead into halftime on Friday. The broadcast became even more interesting when the fog continued to thicken late in the second quarter.

It’s so foggy in Corvallis that the official couldn’t see the interception 🌫 pic.twitter.com/wNiXdlZWT4

Good thing that both teams were rocking highlighter uniforms.