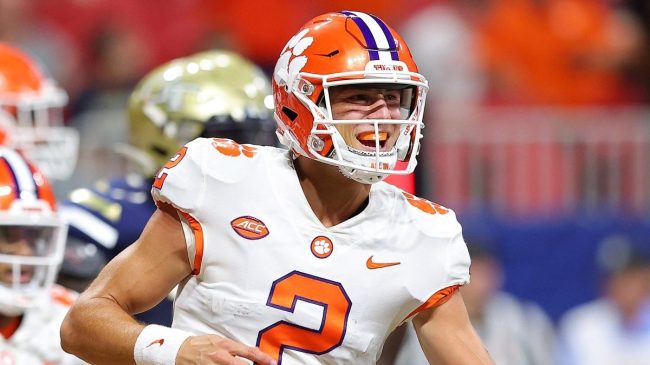 A once-promising 2021 Clemson football season was ultimately derailed by a stale, struggling offense. Yes, the Tigers went 10-4, but they fell sure of their lofty standards and didn’t sniff the College Football Playoff.

Much of the issues fell on the shoulders of former five-star recruit D.J. Uiagalelei. Uiagalelei was the No. 2 overall recruiting in the 2020 class according to 247Sports, but things never really clicked for him in his sophomore season. The California native threw for just 2,246 yards and nine touchdowns.

But this year the expectations are higher.

Uiagalelei dropped over 30 pounds in the offseason and coach Dabo Swinney had rave reviews for the young signal caller. Monday night offered the first opportunity for Uiagalelei and the Tigers to prove things would be different when they opened the 2022 season against Georgia Tech.

Things did not go as planned.

The Tigers entered the game as 24.5-point favorites against the Yellow Jackets. But for much of the first half the Clemson offense was stuck in the mud. Uiagalelei fumbled twice and threw for just 108 yards in the first two quarters as the Tigers limped to a 14-3 halftime lead.

Fans were not happy about the performance.

🚨MELTDOWN ALERT 🚨 #Clemson is tied at 0 with #GeorgiaTech in second quarter. #MeltdownAlert pic.twitter.com/CyhhqSomHS

Things got a bit better in the second half as Clemson ran away for a 41-10 victory. But Uiagalelei remained unconvincing, finishing the night 19-of-32 for 209 yards and just the one touchdown.

The situation got even worse when Klubnik came in late in the contest and led the Tigers right down the field for a touchdown. The class of 2022 five-star finished the night 4-of-6 for 50 yards and a touchdown, and Clemson fans have already made up their minds.

But it’s not just fans who say a difference. Media members were impressed by Klubnik as well.

Is it me or was the energy so different from Clemson’s offense when Cade Klubnik came in the game? I know it was “garbage” time but it just felt like there was more juice.

It certainly appears Dabo Swinney now has a tough decision to make.

Clemson has two weeks to mess around with this QB situation and its offense before at Wake and home for NC State.