Cleveland Browns Fans Are Down Bad While Watching Odell Beckham Jr. Ball Out In The Playoffs 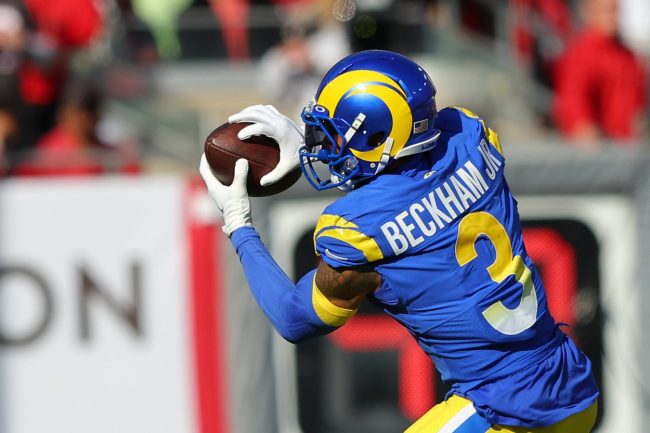 Browns fans should probably not go on Twitter this evening. And they definitely should change the channel away from NBC.

As the Los Angeles Rams jumped out to a big lead over the Buccaneers in the NFC Divisional Round, Cleveland got dragged online. The AFC North franchise caught all kinds of heat for trading Odell Beckham Jr.

OBJ, who began his year in the Forest City with the Browns and didn’t do anything. Now he’s balling out in the playoffs while they are at home.

In six games with Cleveland this year, Beckham did not score a single touchdown and had only 17 catches for 232 yards. In nine games, not including Sunday, with the Rams, he had 359 yards on 31 catches with six touchdowns.

During Sunday’s game against Tampa Bay, Beckham was impressive. His stat-line was one thing, but the plays he was making were another.

Having OBJ on the field is an undeniable asset.

And the Browns just let him walk.

After being traded from New York to Cleveland in 2019, Beckham played in just 13 games with the organization. He caught 40 of 77 targets for 551 yards and three touchdowns.

The Browns tried to claim that he just didn’t have it anymore and Beckham got fed up with the quarterback situation and lack of opportunity with the franchise. In early November, the team released him and when he cleared waivers, he was free to sign anywhere.

Joining Los Angeles made a lot of sense and it has proved to be the right decision.

As a result of Beckham’s strong outing on Sunday, the internet had all kinds of jokes.

BROWNS FANS, LOOK AWAY! Here are some of the reactions:

Damn… Sooooo do we as a football community owe OBJ an apology or we just gone act like the Cleveland Browns didn’t have us thinking he was washed lol dawg looking like he in rare form https://t.co/bLYYRPFbMN

How the browns look at baker mayfield everytime OBJ makes a play pic.twitter.com/Km9i11r5hy

Browns said OBJ was the problem not Baker Mayfield

So the Browns blamed OBJ and called him a team concern. He has fit in so well with the LA Rams 🐏 which confirms the Rams have a better locker room or this was a Cleveland issue 🤣

Just checking. The Cleveland Browns got nothing for releasing Beckham, right?

Maybe the quarterback was the problem @Browns

Issuing a fatwa on the "Cleveland Browns" for releasing OBJ