The Browns Suck, But Vegas Thinks Sean McVay Will Be Their Next Head Coach 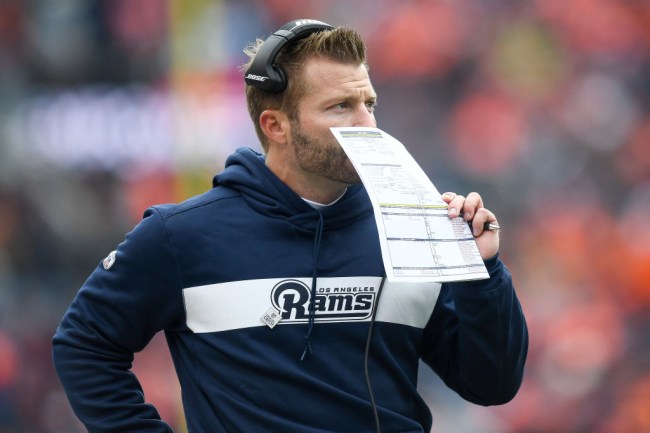 The Cleveland Browns, once again, proved that they’re the most dysfunctional organization in pro sports today, not only firing head coach Hue Jackson, but releasing offensive coordinator Todd Haley of his duties, too. As if the jokes weren’t already piling up on a team that went a combined 1-31 under Jackson before this season, this kind of dysfunction within the front office leaves open the pos

While the Browns may have canned two coaches this morning and seem lost for what the future holds, there’s actually some optimism for fans of the team thanks to Vegas. That’s because, according to the highly trusted sports betting site, OddsShark, the next head coach of the Cleveland Browns will be Sean McVay.

Who will be the Cleveland Browns next full time Head Coach? (@betonline_ag):

Yep, I can’t stop laughing at this. I get it: Sean McVay has ties to Ohio being born in Dayton and going to the same school that Ben Roethlisberger went to, Miami (Ohio), but I’ve got to think this is a longshot for a guy whose team is currently undefeated and a huge favorite to reach the Super Bowl.

Sure, the whole “Ohio roots” thing worked for the Cleveland Cavs back in 2014 by getting LeBron James back to Cleveland, but I’m not sure Cleveland sports teams are lucky enough to catch lightning in a bottle twice. Plus, when you add in the instability over the years with the Browns, why in the hell would Sean McVay want to step into that?

As a side note, props to Oddshark for even throwing Bill Belichick’s name on this list, giving him +2000 odds to return to the team that gave him his first NFL head coaching gig. Yeah, I’m sure the greatest coach in NFL history’s looking for a way to get out of the most stable franchise in sports right now, the Patriots, to return to Cleveland.

With an apparent quarterback of the future in Baker Mayfield, a general manager who has shown to have balls in John Dorsey and a fanbase who continues to support this crappy franchise no matter what, the Cleveland Browns might have a bright future, but I doubt it’s going to include Sean McVay being part of it — so I’d advise anyone from putting money on thinking otherwise.