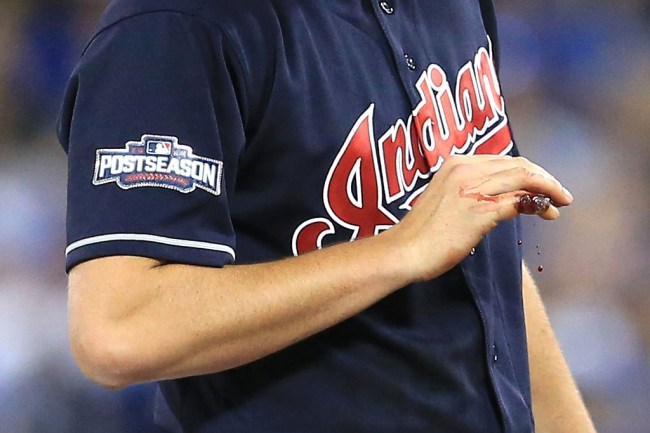 Cleveland Indians pitcher had to sit out game 2 of the ALCS on Saturday after he sliced his pinky finger handling a drone.

Here is Brauer addressing the drone situation before Game 3.

On Thursday night, Bauer was working on his drone. It’s one of “eight or 10” that make up his “fleet,” and most of them need constant upkeep.

“I plugged it in, like I’ve done thousands of times, and my finger happened to be in front of one of the (four) propellers,” said Bauer. “For whatever reason, three of the propellers didn’t spin like they’re supposed to, and this one spun up at max throttle.

“I have no idea why it happened. My finger just happened to be in the way of the prop and it cut me.”

Bauer called a cab and went to the emergency room. The cut required 10 stitches and forced manager Terry Francona to flip-flop Bauer and Josh Tomlin in the rotation

And here is a picture of Bauer showing off his nasty finger before playing in tonight’s game.

Update: Bauer’s finger is now bleeding on the mound and he was pulled from the game.