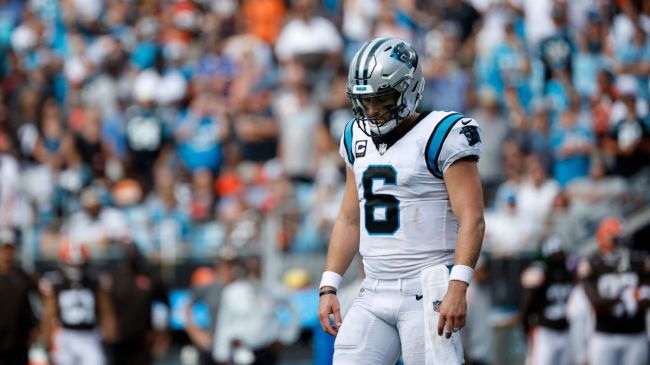 Clearly intent on kicking the man while he’s down, The Cleveland Plain Dealer — the biggest newspaper in the Ohio-based city of about 383,000 people — ranked Carolina Panthers QB and former Browns castoff Baker Mayfield dead last in their current NFL quarterback power rankings.

The Cleveland Plain Dealer‘s brutal shot at Mayfield comes not only after the Panthers got beat down by the San Francisco 49ers over the weekend (which dropped their record to 1-4) but following news that the Panthers head fired head coach Matt Rhule AND that Mayfield is, once again, injured.

“Mayfield’s fall since the end of the 2020 season has been a shocking one to say the least. It’s also fair to say that the Panthers probably didn’t expect the trade for Mayfield to work out as poorly as it has. Mayfield has the worst quarterback rating (71.9) and completion percentage among qualified starters. To make matters worse, he could miss several weeks with a high ankle sprain,” the newspaper writes in its explanation of Mayfield’s ranking.

It should be noted that Mayfield is ranked behind the likes of Carson Wentz, Justin Fields ((who has completed a grand total of 49 passes through five games), Davis Mills, and rookie Kenny Pickett, who has zero touchdowns and four picks through about 1.5 games.

To be fair to The Cleveland Plain Dealer, their decision to put Mayfield at rock bottom is certainly warranted as the former Heisman Trophy and #1 overall pick in the draft has been so poor this year that it’s now evident his future in the NFL will likely be that as a back-up signal caller.

With both Mayfield and fellow first-round bust Sam Darnold both sidelined, the Panthers and interim head coach Steve Wilks will now be turning to third-string QB P.J. Walker for the next few games.

This weekend, the Panthers take on a wounded LA Rams team before a pair of NFC South divisional matchups against the Tampa Bay Bucs and Atlanta Falcons to close out October.

RELATED: Baker Mayfield Is Putting Together An Absolutely Incredible Resume As A Coach Killer In The NFL