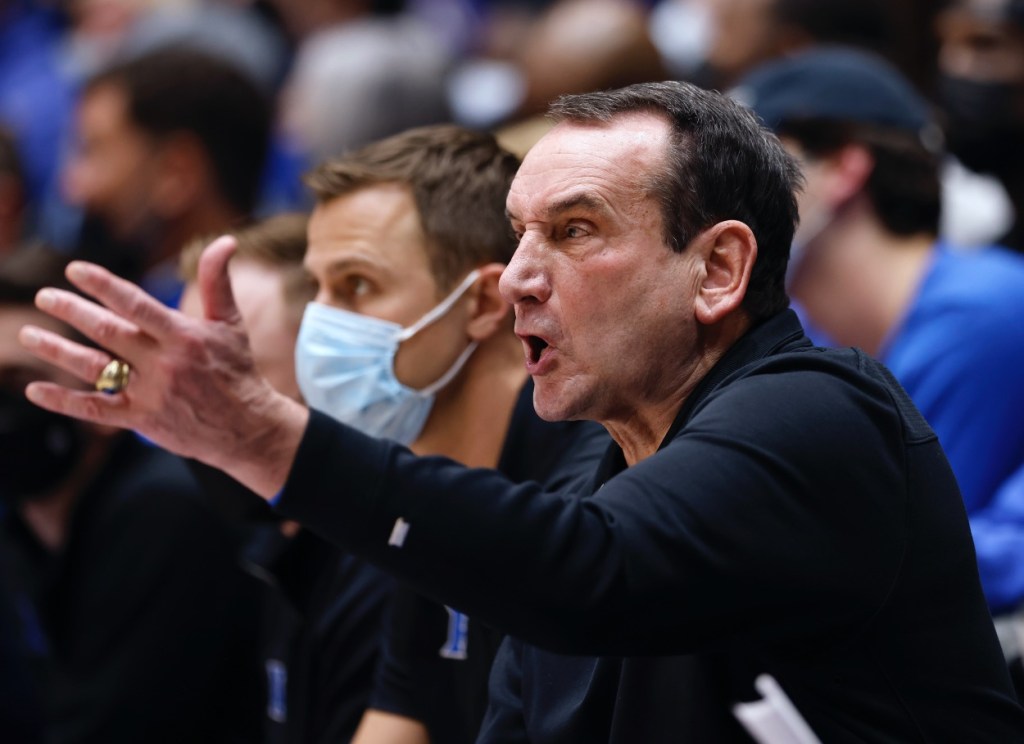 The Duke Blue Devils have REALLY turned it around this year after finishing last season unranked. Coach K’s team is currently the #2 team in the land (12-1, 10-0 at home) and they had no trouble beating Georgia Tech and Michael Devoe on Tuesday 57-69.

A very odd moment came with just 6 minutes left in the game. Georgia Tech’s Michael Devoe appeared to point at Duke’s legendary head coach and possibly say something that triggered Coach K. This led to Mike Krzyzewski basically chasing after Michael Devoe while shouting at him and chirping back.

Coach K is on his victory tour. Pretty much every Duke home game this season is a ceremonial sendoff for the man who led the Duke Blue Devils to 5 National Championships, 12 Final Fours, and 15 ACC tournament championships. That made this uncharacteristic moment from Coach K even stranger.

The moment between Georgia Tech’s Michael Devoe and Coach K quickly went viral on Twitter (reactions below). Devoe led the Yellow Jackets with 21 points in the game and he was feeling good but that altercation clearly threw off the vibe.

After the game, Yellow Jackets coach Josh Pastner said he would discuss the incident with Michael Devoe personally but their discussion would remain private. Over on social media, a lot of people tried to guess what could’ve possibly been said to trigger the normally-reserved Coach K into an outburst.

OMG he literally made a beeline for Devoe and lectured him. There are fewer living legends I respect less than K. https://t.co/jQTspoJl5y

Oh no… Coach K got his feelings hurt by a college kid again🙄 https://t.co/lMmxL7K3TX

K was upset because the refs let Tech take 12 free throws and Duke only got 40.

Devoe, "I guess (Coach K) took it the wrong way because for some reason, but I have the utmost respect for him. I went and apologized after the game and everything like that, but I don't know which way he took it." Devoe said he said something to their bench not coach K.

I don’t care what Michael Devoe said or who he said it to. If Coach K was that triggered and pissed off he should’ve gone to Georgia Tech’s coach first and not chased after the player.

I say this as someone who once had his baseball coach try and fight him inside of the batting cage and the coach had to be restrained by other coaches. It was easily one of the most f’d up situations I’ve ever been in and I said nothing to set the coach off, he just flipped. Let Georgia Tech’s coach work it out with his players, Coach K doesn’t have a relationship with Michael Devoe hence why it looked so awful on tape.