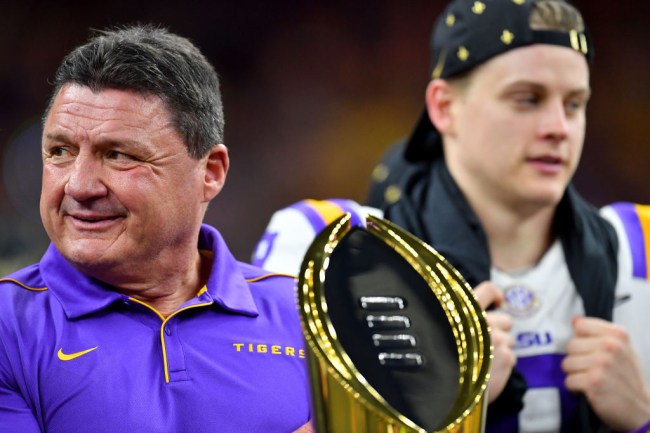 Following LSU’s epic National Championship victory over the Clemson Tigers last week, the university has wisely made sure to resign Coach Ed Orgeron for the foreseeable future, as reports indicate that the beloved “Coach O” has signed a six-year contract extension with the school.

During Coach O’s tenure, LSU has amassed a 40-9 record and has gone 11-1 in their last 12 games against ranked opponents, which is a remarkable feat and a testament to Orgeron’s ability to manage his team in the most important games.

SOURCE: Ed Orgeron and #LSU have agreed to a 6-year contract extension valued at more than $42 million in total… Orgeron is 40-9 since taking over at LSU and is 11-1 in his last 12 games against Top 10 opponents.

The 58-year-old Orgeron, who is famously from Lousiana, became the oldest head coach to win their first National Championship after his Tigers put a whooping on Dabo Swinney’s Clemson Tigers by a score of 42-25.

Prior to taking over as LSU’s interim coach back in 2016, Orgeron was the interim head coach at the University of Southern California in 2013 and was the head coach of the Ole Miss Rebels football team from 2005 to 2007.

After guiding the LSU Tigers to a 6-2 record during his interim stint, Orgeron was officially named the 32nd head coach in the program’s history on November 26, 2016. Since then, LSU has developed into a national powerhouse, culminating in their first National Championship since 2007.

Orgeron has also become something of a cultural phenomenon in the process, as his distinct gruff Southern voice, no-nonsense-attitude, and apparent heart of gold as endeared the Louisianan coach to college football fans across the nation.

Coach O and his LSU Tigers will begin their defense of their National Championship when they take on the USTA Roadrunners on Saturday, September 5.