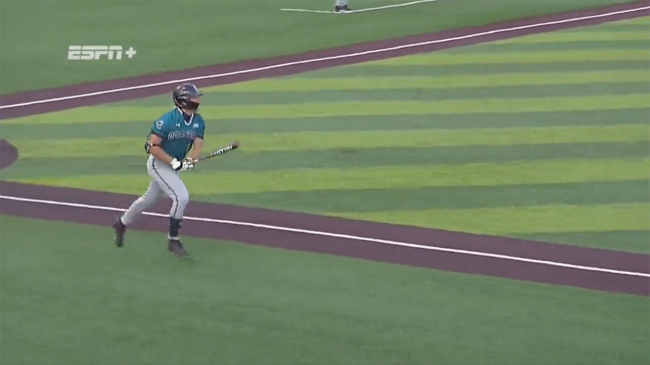 Coastal Carolina and Appalachian State do not like one another. The two Sun Belt Conference schools have a hatred for each other that stems from the football field but translated to the baseball diamond on Friday.

The Chanticleers traveled to Boone for a Thursday, Friday, Saturday three-game series this weekend and made their presence felt. After beating the Mountaineers 14-3 in Game 1, the Coastal offense did not stop hitting in Game 2.

Jumping out to a 4-1 lead early, Chanticleers utility man Nick Lucky stepped up to the plate in the top of the fifth inning. The former 14th-round MLB Draft pick worked a 3-2 count and sat on an off-speed pitch right into the middle of the zone.

When the ball crossed the plate, Lucky proceeded to take a big, sweeping swing and sent a solo home run to deep right-centerfield. It was gone in a hurry and may not have landed yet.

While on his way to first base, Lucky took the time to admire his shot and proceeded to unleash what might be the most vicious bat flip of all-time. No hyperbole.

Lucky held the bat out in front of him with two hands until he was about half way down the line. At that point, he switched the bat to his right hand, swung it back and then let it come forward, sending his bat to the moon just a few steps before reaching first base.

It was legitimately one of the most savage and ruthless bat flips in the history of baseball, take a look:

Coastal went on to win the game 6-1 and took the series.

Obviously, the baseball purists (read: grumpy olds) are going to be furious when they see Lucky’s bat flip. iT dIsReSpEcTs ThE iNtEgRiTy Of ThE gAmE, or something like that.

To counter that point, it was sick. Baseball is about having fun and letting loose, even if that means that there is a little bit of disrespect involved — especially against a rival. Let the boys play and let them play loud!