L.A. Dodgers Outfielder Cody Bellinger Is A Postmates Fiend And His Eating Habits Are Extremely Relatable 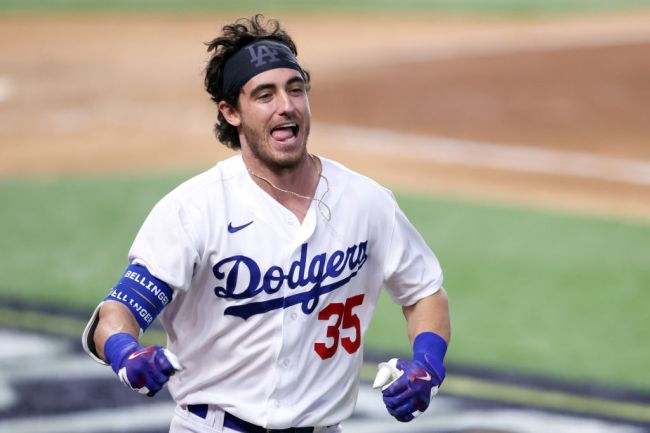 Los Angeles Dodgers outfielder Cody Bellinger may be worth more than the average 25-year-old, but he is equally as keen on having his favorite foods delivered to his door. When you’re making $16.1 million this year alone, you can be a little bit more generous with spending on delivery fees, and the 2019 NL MVP certainly has.

From Bellinger’s first order with Postmates on July 31, 2018, through the final game of the World Series on October 28th, 2020, he ordered on the app 257 times from 100 restaurants in 16 cities. 820 days passed in that just-over two year span, which means that he Postmated a meal 31.4 percent of the time. That’s a pretty significant amount, especially considering the meals that he is provided and are served by the team.

With money like he has, it seems like Bellinger is quick to pull the trigger and order multiple times in one day, unlike most of us who would shy away from three delivery fees. Take Halloween of last year, for example. He ordered three times that day:

Of those 257 total deliveries, he ordered 700 different items that are not necessarily what you’d expect from a premiere athlete in peak physical shape, and it’s all fairly simple. His top order is a classic— the good ole Chipotle bowl. Bellinger gets double steak, white rice, sour cream, cheese and fresh tomato salsa with chips and guac on the side. He doesn’t step too far outside of the box, and when he finds something he likes, he orders it time and time again.

It started with his first-ever order from Roscoe’s House of Chicken ‘N Waffles, one of the best and most famous spots in Los Angeles. He chose the Carol C. Special, which is just a singular chicken breast and a singular waffle. Pretty basic, but incredibly delicious, and he ordered it again the next day. Literally back-to-back Carol C. Specials on back-to-back days. It makes you wonder what he was up to that week, because it is a legal state after all… if you catch the drift.

Bellinger also loves Shake Shack, because who doesn’t?! He has ordered 25 Shack Burgers since 2018, his second most-ordered meal, but occasionally mixes it up and gets the plant-based Impossible burgers. If it’s not a burger, the Scottsdale, Arizona-native is a big fan of Detroit-style chain Jet’s Pizza and chicken sandwiches. When it comes to the sandwich war, he’s team Popeyes. However, he has ordered Chick-Fil-A just as many times as Shake Shack, so maybe his wallet is really the one doing the talking.

The majority of his orders speak to a diet that is not uncommon from most of our own, but when Bellinger wants to splurge, he is a big fan of spicy tuna and yellowtail sushi, extravagant pizza nights and steak dinners. Nothing out of the ordinary, but all delicious things.

Of his many receipts, the best came after the Dodgers’ World Series win back in October. Whether it was because the COVID-19 pandemic kept him from partying, or because he would rather stay at home and do his own thing, he ordered some frozen yogurt. Specifically, Bellinger ordered a celebratory Banana Split with strawberries, carob chips and blueberries. An excellent way to bask in a Major League Baseball championship.

Beyond ordering from the app, Bellinger most recently partnered with Postmates to donate meals to everyone in the Glendale Fire Station. The meal, called the ‘Hey Batter Batter,’ is chicken tenders or wings served with a waffle from Dodgers Home Plates in L.A., in homage to his first-ever delivery from Roscoe’s.

Bellinger’s Postmates receipts are about as relatable as they come, and his donation is just the likable cherry on top of his banana split. You can find out more about his partnership with Postmates here.