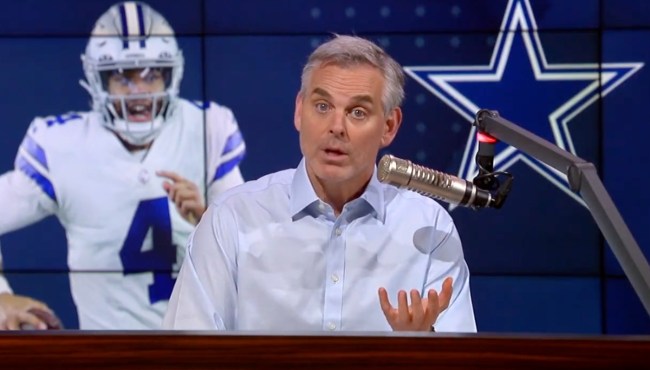 The vast majority of NFL fans would rank Dak Prescott ahead of Carson Wentz on a list of NFL quarterbacks. There’s a good chance every coach and general manager around the league would do the same, but Colin Cowherd doesn’t seem to care or think that way.

According to the Fox Sports host, it’s “a coin flip” of which QB is better between Wentz and Prescott.

During Tuesday’s edition of ‘The Herd,’ Cowherd ranked the quarterbacks in each division around the NFL. In the NFC East, Cowherd ranked Wentz No. 1, Prescott No. 2, Jalen Hurts No. 3, and Daniel Jones last in the division.

Cowherd went on to explain that he likes Wentz physically, but Prescott mentally, for whatever that’s worth.

"Carson Wentz and Dak. It's a coin flip."@ColinCowherd looks at each division and each starting quarterback pic.twitter.com/QN28wr4aFK

Both Wentz and Prescott have played exactly 85 games in the NFL, so comparing the two is rather simple.

Prescott’s career completion percentage is 66.6%. He’s thrown for over 22,000 yards, has 143 touchdowns compared to 50 interceptions, and has led 10 fourth-quarter comebacks.

Wentz on the other hand has a career completion percentage of 62.6%. He’s thrown for just over 20,000 yards, has 140 touchdowns, 57 interceptions and nine fourth-quarter comebacks.

Cowherd Gets Roasted For His Wentz Over Prescott Take

The NFL is a ‘what have you done for me lately’ business and Prescott has certainly done more than Wentz as of late. Last season Prescott threw 10 more touchdowns than Wentz, won a division title, and got his team to the playoffs.

Wentz did neither of those things and choked along with the rest of his Colts teammates in the regular-season finale.

As you would expect, NFL fans jumped on Twitter and blasted Cowherd for his take:

Cowherds obsession with Wentz is one of the craziest things I’ve ever seen https://t.co/MJzHtqc3hk

He has to be fed this take
This is a horrible take https://t.co/XpURMHFT1M

He seriously just said he likes Wentz over Dak because he likes Dak mentally but Wentz physically…the dude that can’t stay healthy is who he likes physically. The way he ranks QBs by how their bodies look is always amazing. https://t.co/OckGfaKibn

Lmaooooo this is why I continue saying Dak is one of the most disrespected players in all of sports https://t.co/0BKE7egg4T

You are forever a leader in the circus https://t.co/ZRMwxXBTV6

This was put to bed YEARS ago….don't revive this. Carson is NOT better than Dak. He's just not. It's not up for debate. https://t.co/k8TGCe4RNd