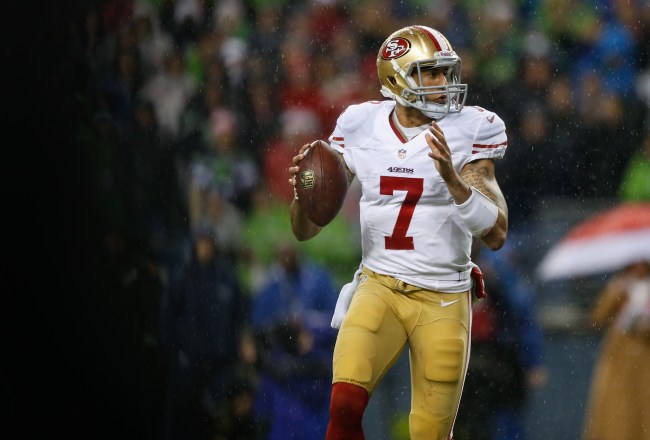 Colin Kaepernick gear and memorabilia is extremely hot these days.

Earlier this year Kaepernick’s all-black Nike jersey sold out in seconds and was available on resale markets for multiple times the retail value.

Now, Kaep’s game-worn NFL debut jersey has become the most expensive NFL jersey ever sold at auction after someone paid $128k for it.

Kaepernick signed the jersey from his rookie debut — inscribing it with the message “2011 game worn rookie jersey” — and then gifted it to family friend and reporter, Aaron Prince, who put it up for auction in 2019.

The item made its way to Julian’s Auctions in 2020 — where it sold at a high profile event for $128,000 to a buyer whose identity has not yet been revealed.

Julian’s claims it’s the highest price ANYONE has ever paid for a game-used NFL jersey, EVER.

The jersey is from Kaepernick’s rookie debut on October 2, 2011 where he subbed in for Alex Smith for one play to hand it off to running back Frank Gore before heading back to the bench.

SOLD for $128,000! The 49ers jersey game worn by Colin Kaepernick during his rookie debut in his first NFL regular series game on October 2, 2011.