Protestors Show Up To Colin Kaepernick’s NFL Workout In Atlanta 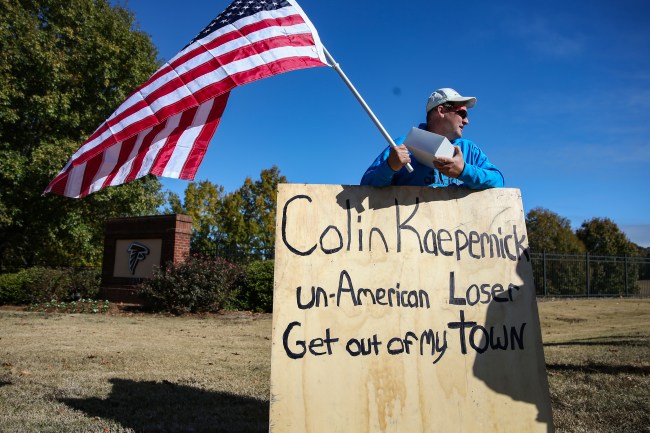 Colin Kaepernick is in Atlanta today to workout in front of NFL teams and protestors who angry at him for kneeling during the anthem showed up early to the facility.

According to several reports, Kaepernick is going to workout in front of 25 teams on Saturday at the Falcons facility in Flowery Brance.

Here is the plan today for Colin Kaepernick’s workout. 25 teams are confirmed to be planning to attend, mostly pro scouts. Video will be available for all teams within 24 hours. https://t.co/oYwGeymi1w

Sources: The NFL is providing three wideouts for the Colin Kaepernick workout but Kaepernick may bring up to five of his own. Former 49ers teammate Bruce Ellington, who played with Kap in 2014-15, is expected to attend.

Of course, people who are not fans of Kaepernick’s protesting of the anthem showed outside the Falcons’ practice facility to make their voices heard.

Sign outside of the entrance to the facility. pic.twitter.com/QDNpCFwWlE

Many viewpoints here at the Falcons Training facility. pic.twitter.com/QpttIMr7nI

Additional signs, and flags at the entrance of the facility. pic.twitter.com/840iQx29dU

There were also people at the facility to support Kaepernick before his workout in front of league scouts.

Supporters are also sharing their thoughts on Kaep. pic.twitter.com/fMs0Bfha70

A few women joined the group of supporters. pic.twitter.com/wfErpBg6Ay

Whether or not Kaepernick gets signed by an NFL team he will always be a controversial figure that will draw people in support or protest.