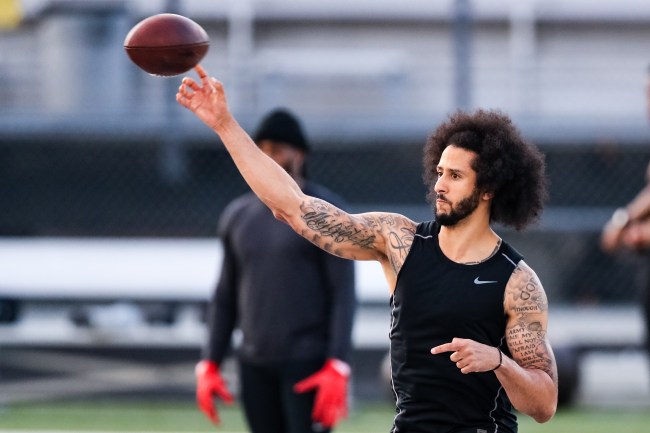 Colin Kaepernick is still hoping to play in the NFL in 2020.

According to a report from TMZ, Kaepernick, who hasn’t played in the league in over three years, is still training every day “as if he’ll be on an NFL roster” next season.

Colin Kaepernick is still training EVERY DAY — busting his ass as if he’ll be on an NFL roster in 2020, sources tell TMZ Sports.

We’re told 32-year-old Colin has not broken his routine — he’s still hitting the gym and the field daily — and as one source close to Colin put it, “He’s in the best shape of his life.”

TMZ’s report comes as several high-profile players including Falcons QB Matt Ryan and Seahawks running back Carlos Hyde have come forward to call for an NFL team to sign Kaepernick for this upcoming season.

Matt Ryan says Colin Kaepernick should have every opportunity to have a spot on a roster in this league. pic.twitter.com/gC6ns3Cy7y

Carlos Hyde believes that an NFL team signing Colin Kaepernick would show that the league is serious about doing its part to improve issues of racial inequality. https://t.co/AOn2bwaQWF pic.twitter.com/dqtr3u1pvo

What can the NFL do? I think the NFL can start by signing Kaep back,” Hyde, a former teammate of Kaepernick at the 49ers, told reporters on Monday.
“I think if they sign Kaep back, that’ll show that they’re really trying to move in a different direction. Because Kaep was making a statement four years ago about what’s going on in today’s world and the NFL didn’t bother to listen to him then, so I think they should start by doing that.”

I have @Kaepernick7 phone number if y’all need it! It’s time that he is employed. How long will the @NFL say they are listening and willing to be at the forefront of change but continue to exile him for trying to do the same?! Until he’s signed, let’s call this what it is…PR https://t.co/viC5EpDiPA

Despite pleas from players to get Kaepernick back in the NFL there hasn’t been much momentum from any team in the league to sign him thus far.