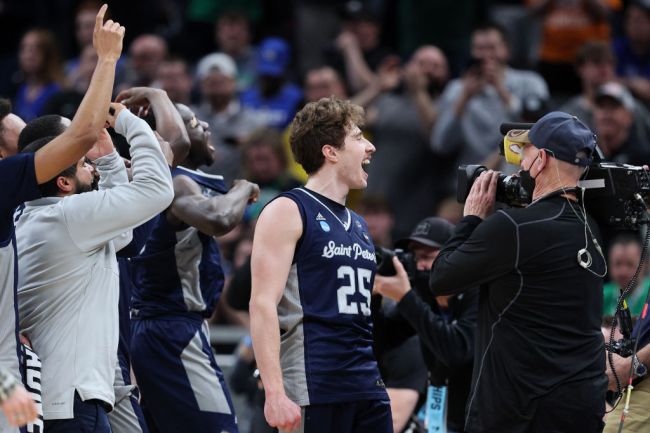 College basketball fans were treated to a surprisingly competitive game tonight late in the slate of NCAA Tournament day 1 games. Kentucky was expected to roll over Saint Peter’s in a 2 vs 16 matchup. The game did not play out the way the script was written.

Instead of the usual blowout you expect out of a 2 seed’s first round game, we got the most exciting game of the day so far. Saint Peter’s absolutely went to battle with Kentucky, answering absolutely everything that the blue blood from the SEC had to offer in a game where neither team ever led by more than 6.

The game started out a bit slowly with neither team managing to score for the first 2 and a half minutes. Then the flood gates opened. The teams combined for 38 points over the ensuing 7.5 minutes and spent the rest of the game going blow for blow until eventually needing overtime to settle things.

In OT, Kentucky took an early 4 point lead, but then Saint Peter’s scored 10 of the next 11 to take a 5 point lead. Kentucky would hit a 3 as they tried to mount a comeback, but just didn’t have enough to outlast Saint Peters and fell 85-79 in a huge upset.

KENTUCKY FALLS TO THE PEACOCKS OF SAINT PETER’S

Live look at everyone with @KentuckyMBB going to the Final Four on their bracket pic.twitter.com/LqunldQz4j

Saint Peters pulling up to the 2nd round pic.twitter.com/5cDGpo4gBR

Kentucky spends 12.5x as much on men's basketball as Saint Peters. I am almost certain this is the biggest upset by expenditures ratio ever.

It just lost to St. Peter's.

March has a breakout star.

His name is Shaheen Holloway.